Micki Nielsen (25-1, 15 KOs) is full of confidence as he prepares to challenge Yves Ngabu (19-0, 14 KOs) for the European Cruiserweight title on Saturday night at the Eventhal Schiervelde in Roeselare, Belgium.

Nielsen faces his biggest career test as he attempts to dethrone the undefeated champion in his backyard, but the hard-hitting Copenhagen-native believes he is up to the challenge and ready to bring the EBU belt back to Denmark.

“I feel great,” said Nielsen. “I’ve boxed away from home before, and to be honest, it doesn’t bother me, especially when I know I have what it takes to win.

“I’ve had no problem making weight, my conditioning is good, and my coach says I’m in my best shape ever. I’ve worked hard and I’m ready to become European Champion on Saturday.”

Ngabu claimed the European title with a fourth-round knockout win over Tomas Ladi in April 2017, before retaining the belt in similarly emphatic fashion when stopping Geoffrey Battelo in the fourth-round in his first defence in January.

“He’s definitely a good opponent, but I believe I’ve faced better,” says Nielsen, who sees a victory over Ngabu as his route back to the upper echelons of the cruiserweight division following his sole career defeat to Kevin Lerena in 2016.

“I’ve watched his fights and I know he likes to come forward and throw a lot of shots. He throws some good punches and likes to use his uppercuts on the inside, but I’m confident in my own ability and I feel well prepared.

“I want to knock him out in front of his fans on Saturday. It will be a statement for me to prove I’m back and ready to face the best in the division.

“Of course, the victory is the most important thing, but a knockout will bring me back to where I was before my defeat to Lerena, and a European title will open the door to some great fights and some big shows in Denmark. That’s the goal!” 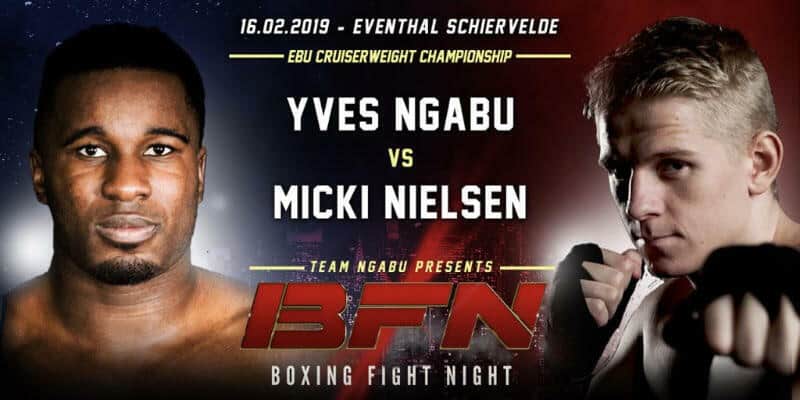 Promoter Nisse Sauerland is backing his man to get the job done in Belgium.

“We’ve only seen glimpses of Micki’s true potential so far,” says Sauerland. “But on Saturday, he has the opportunity to show what he’s made of by taking the title from an undefeated champion. Ngabu is a strong opponent, but I believe Micki has the strength and ability to become European Champion.”

Micki Nielsen’s European Cruiserweight title challenge against Yves Ngabu can be seen live and exclusive in Denmark on TV3 Sport from 20.00 (CET).