Boxing legend Chris Eubank stunned the culinary world this week when advancing in Masterchef UK by cooking a tin of corned beef.

While Blatt and Malone excelled with their cooking, Eubank, Parisi, and Mojo struggled.

But Eubank, as usual, took the limelight with his eccentricity and quipped about how his food is ‘deliciouso’ and means love.

The episode began with contestants having to whip up a plate using an ingredient Masterchef hosts John Torode and Gregg Wallace chose pre-round.

Handed a butternut squash, Eubank seemed quite happy to crack on. He stated he intended to keep it simple. That’s precisely what the former champion did.

Poaching the vegetable with garlic and thyme after peeling it and chopping it in half, Eubank spent half the allotted hour of cooking time standing around.

Once presenting the dish to John and Gregg, Eubank beamed as if he’d cooked a Michelin-starred masterpiece.

It was lucky for Eubank that it was only the opening round, and nobody was leaving the competition at that stage. However, the judging brought feelings that John and Gregg were scared to criticize Eubank for not cooking much in a cooking tournament.

Both Masterchef judges said they wanted more than a poached butternut squash in the next round.

A palette test was next for Eubank and the other four in round two. They had to taste the Canadian national dish of poutine before listing the ingredients and eventually putting them together.

Eubank did reasonably well. However, when listing the ingredients for the fries portion of the dish, Brighton’s finest put ‘French’ rather than potato.

John and Gregg again saw the funny side as Eubank attempted to make poutine for the first time. It wasn’t the greatest attempt as Eubank made gravy with merely oil and butter without adding stock.

Again, Eubank was okay, as nobody was getting knocked out. It was onto round three. This time, “Simply the Best” had to cook his own dish.

Contestants could bring whatever they like in a bid to push for a place in the quarter-final.

For most of the round, producers focused on those making more complicated dishes, like Mel Blatt’s cottage pie or Minty’s squid ink pasta.

With minutes until the judging, cameras panned to Eubank’s bench that saw him slicing a tin of corned beef.

He intended to add the shop-bought product to onions and tomatoes and fry it. It is an authentic dish called ‘Bully Beef.’ 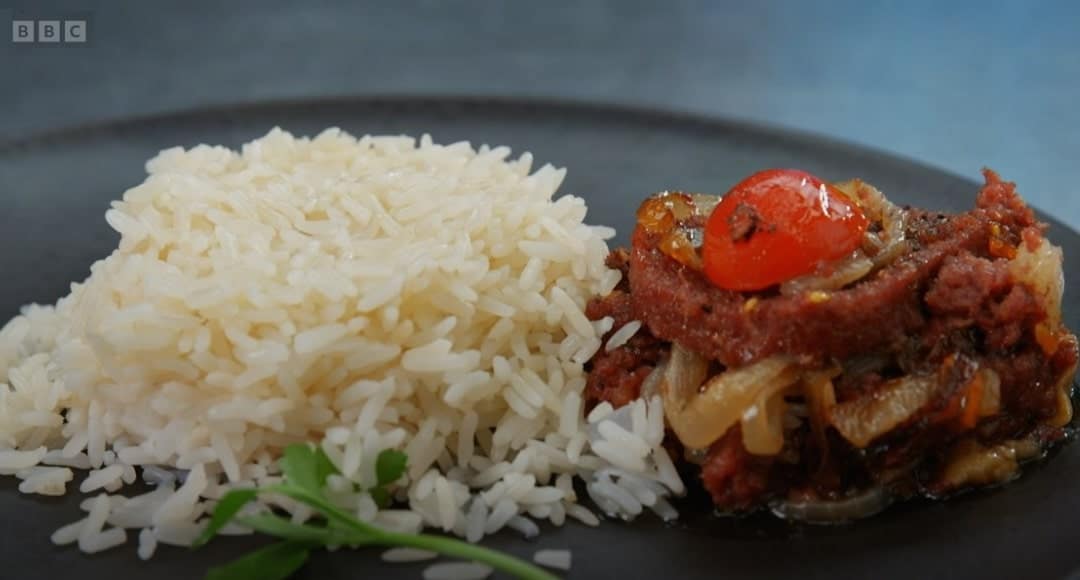 According to Eubank, his mother used to make it for him as a youngster.

Seemingly getting the benefit of the doubt due to his addition of cooking rice, John and Gregg didn’t have too many bad things to say about it.

Amazingly, Eubank sneaked through to the next round. Sadly, MoJo had failed to cook her prawns all the way through. Eubank subsequently beamed with delight.

For his efforts, Eubank gets at least one more episode on Thursday at 8 pm on BBC1. Is pot Noodle on the menu next?