Home » Floyd Mayweather undefeated in 26 years – who beat him last?

Floyd Mayweather undefeated in 26 years – who beat him last?

Floyd Mayweather continues to grace the ring at 45 and remains undefeated in 26 years. The last man to defeat him was an amateur legend.

That reverse came against a much slighter teenage Floyd Mayweather at the Atlanta Olympic Games in 1996.

The Grand Rapids native claimed a bronze medal for his efforts. Shortly after, Mayweather turned pro – and the rest is history.

Bulgarian Serafim Todorov ousted Mayweather for a gold medal shot in the semi-finals. He scored a controversial decision by the slightest of 10-9 margins.

Mayweather raised his hand at the end, which was a fair reflection of how the contest went. It could have been so different for the youngster.

In the final, the far more experienced Todorov lost to Somluck Kamsing.

Discussing his spot on the podium for a home Olympics and his amateur career as a whole, Mayweather has never been bitter.

He explained how he feels to Club Shay Shay.

“If I lost six fights all by one point, then there is something to that,” he pointed out. “But I was fighting on the computer scoring system, so that was difficult.

“As far as how I looked at amateur boxing, it’s a learning program preparing you for the professional ranks if that’s what you choose to do.

“The referee raised my hand because he thought I won. But I am glad that the fight went how it went. It made me work much harder as a professional – not to feel that same pain again.

“It was one of the best things that ever happened to me.”

On Todorov, the ex-Pound for Pound king touched on the Bulgarian being homeless at one point in his life.

“That same guy that I lost to is now homeless, and I feel bad,” said Mayweather. “I wish him nothing but the best. 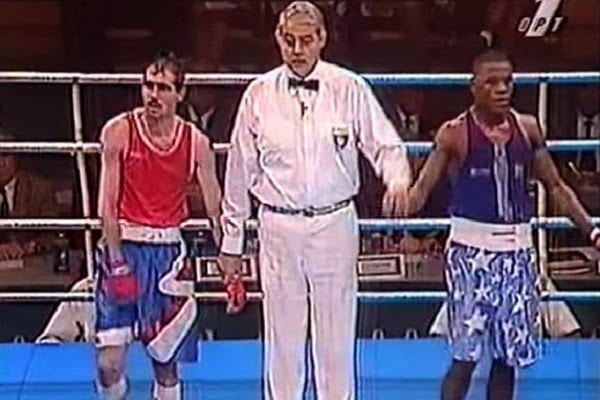 “I don’t know why he didn’t become a boxing trainer because. At the time when we fought, he was already a lot older than I was.

Todorov has since made a small amount of money from selling his story about being the last fighter to defeat Mayweather.

He spoke to the New York Times in Central Park to recollect his memories from that semi-final.

“He was 19, remember. My experience was much stronger.

“I beat all the Russians, all the Cubans, some Americans, Germans, and Olympic champions. I was making fun of them in the ring. British, French — I beat them all,” Todorov proclaimed to Sam Borden.

“I was very smart. I was a very beautiful and attractive fighter to watch. You must be an artist in the ring. I was an artist.

“It was just like any other fight, to be honest — I had beaten much stronger fighters,” he added.

Floyd Mayweather recently stated his defeat to Todorov didn’t affect how he felt about his time at the Games. He still calls it his most significant career achievement.

However, whether winning gold would have altered his career trajectory is another matter entirely. In contrast, 1992 gold medal winner Oscar De La Hoya earned Pay Per View millions far earlier than Mayweather did during his tenure.

Mayweather had the last laugh by beating De La Hoya on Cinco de Mayo in 2007.