Mikey Garcia retires at 34 after failing to land Manny Pacquiao

Mikey Garcia has retired from boxing after failing to land a career-defining fight with Manny Pacquiao.

The multi-weight champion, who lost years of his career when locked into a contract dispute, struggled to nail down opponents upon his return.

From 2014 to 2016, a full 30 months went by without a fight as Garcia attempted successfully to remove himself from Top Rank.

Returning to beat Elio Rojas, Garcia won the WBC lightweight title in his next fight. He then beat Adrien Broner. It was one of only two significant events he managed to land at higher weight classes.

During the pandemic in 2020, Garcia agreed on two fights with Manny Pacquiao. It looked a done deal.

However, developments didn’t go how they should, and the fight fell apart.

In 2021, Garcia discussed what went down after beating Jesse Vargas in a stay-busy clash.

“We’ve always been interested in a fight with Manny Pacquiao. In the last few months, the conversations came up many times,” Garcia exclusively told World Boxing News.

“We started developing a good idea, a plan, a proposal, but it hasn’t really happened. Nothing solid. So, if that’s the case, I’m ready to move on and search for another fight, possibly to get a fight in July or August.

“Maybe that could set me up for something bigger before the end of the year. 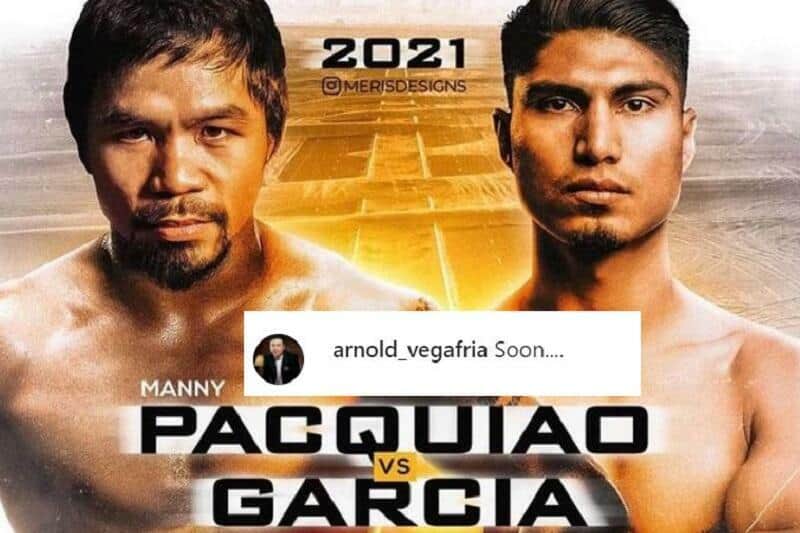 “We’ve been absent for over a year after the fight with [Jessie] Vargas. But many fighters have had absences due to the pandemic. We want to get back, and we’re ready.

“It’s always, ‘Manny loves the fight with you. It’ll be a 12-round fight; obviously, it will be a big event. He loves the idea of fighting you.’ They’ve mentioned [fighting] in Saudi Arabia. They say, Los Angeles. They mention possibly here in Texas. So, we’ve had conversations, but it has never really solidified.

“There’s always something missing, or something keeps it from happening.

“We’ve had all these conversations. I do want to fight. Everybody tells me Manny likes the fight with me, and he’s on board. But he also wants to get taken care of financially.

Sadly, Garcia signed for a fight he didn’t really want on DAZN against Sandor Martin. He clearly couldn’t get up for it and subsequently lost.

That defeat meant Garcia had no choice but to walk away without his dream fight with Pacquiao.

However, with Pacquiao returning for one more run after losing the Presidential election in the Philippines, Mikey’s phone might just ring one more time.

After making his announcement, Premier Boxing Champions wished Garcia well as he moved on with his life.

“The entire PBC Family would like to wish four-division world champion and modern-day boxing great Mikey Garcia a happy retirement!

“Congratulations on an amazing career,” they said.

Garcia defeated Dejan Zlaticanin for the WBC championship before the Diamond belt, and the IBF title followed at 140 pounds.

Showing his versatility when dropping back down to beat Robert Easter for the IBF lightweight crown, Garcia made a mistake by blowing up ten pounds for Spence. It didn’t pay off, and the IBF title was his final accolade of note.

WBN would like to wish Mikey Garcia well in his retirement.