A Ricky Hatton tickets ploy worked, and “The Hitman” can now add a ticket master to his list of achievements.

Manchester’s finest will be happy that his long-awaited comeback fight looks on course to sell out.

Hatton had gotten himself in great shape but now has to wait another five months to get back in the ring in front of his home fans.

The former two-weight world champion announced an exhibition against Marco Antonio Barrera for July 2, a year after rumors surfaced in 2021.

Hatton knuckled down in the gym and lost forty pounds for the event. However, ticket gripes from fans – and from what WBN has learned was a distinct lack of drive for the workout – all meant “The Hitman” had work to do in those early sales days.

Initially, Hatton aligned with Sky Sports to add Hughie Fury to a big UK night of boxing to make the burden of sales easier on himself and his team.

However, Fury got injured and scuppered those plans, and it soon became clear that Hatton and Sky wanted Fury to carry the headliner alongside him.

When sales opened for July, supporters claimed seats were overpriced, leading to a reluctance to purchase in the first few weeks.

Now that Fury pulled out, it became unworkable for Hatton and Sky Sports, meaning the whole night of fights got pushed back to the end of the year.

“I’m gutted to hear that Hughie Fury is injured and wish him a speedy recovery. Talks are ongoing. But we have not decided yet whether to move my Sky Sports bout from July 2. It was on the same bill,” said Hatton.

“I will let my fans know the outcome here first,” he added.

WBN believes there was no way the event would have been where Ricky wanted it to be by then if Fury and Sky hadn’t strengthened the event. Therefore, he had no other option but to give himself those 18 weeks to fill more seats.

Some fans had complained of overkill the first time. Therefore, that was another situation that required a rethink.

Another added: “I assume Ricky Hatton tickets are not selling too well. Based on the number of emails they keep banging out.”

Gutted to hear that @hughiefury is injured and wish him a speedy recovery. Talks ongoing but not decided yet about whether to move my @SkySports bout on July 2 as well, as it was on the same bill. I will let my fans know the outcome here first. pic.twitter.com/MSc931wmYs

Hatton aired his dismay about the delay. But deep down, he will be pleased to get further opportunities to fill more seats in his spiritual home at Manchester Arena.

“I’m absolutely devastated. I got myself in great shape physically and mentally,” Hatton pointed out.

“But we go again each day. I sparred with my son again today. It doesn’t get much better.

Looking at the updated sales from June 23, Hatton vs. Barrera will be snapped up entirely by November. 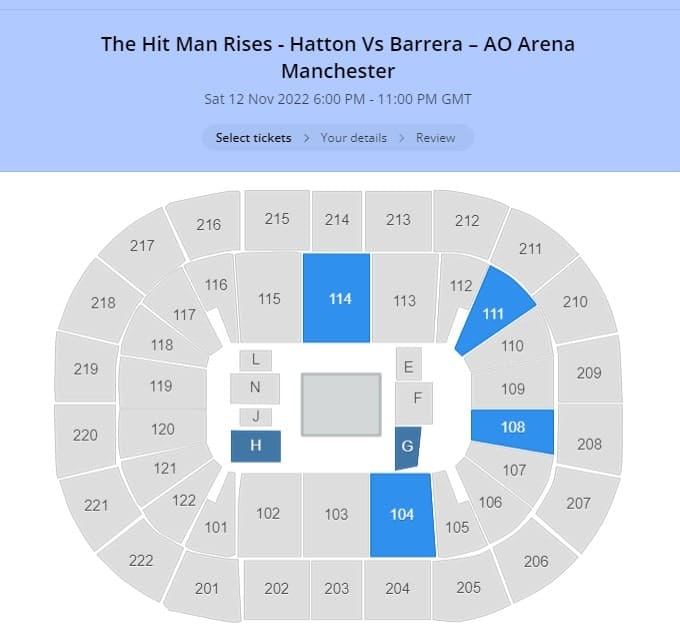 If the event had gone ahead on July 2, it wouldn’t have done Ricky Hatton’s legacy justice.

But if he can sell out that stage for an exhibition on November 12, that would be the perfect send-off for the North West legend.

His weight loss alone deserves that.