When discussing exhibition bouts, Rogan made an unfathomable statement on the former welterweight and heavyweight superstars.

“The difference between Floyd and Mike Tyson is Floyd’s a 155lb. Mike Tyson’s 220lb, solid as a rock.

“Even if he’s 55-years-old, he’s on all the Mexican supplements. He’s on everything. They use muscular electrical stimulation on him.”

The fundamental difference between the pair is that Tyson is over a decade older than Floyd Mayweather. He’s also nowhere near as active on the exhibition circuit.

But comparing them both when they get linked to fighting aging boxers, YouTubers, and celebrity opponents – is arguably not even on the spectrum of the die-hard fans.

Boxing is losing its edge. Comments like Rogan‘s on a podcast with millions of followers does little to help the sport.

He should be discussing Gervonta Davis or the fact that Terence Crawford may fight Errol Spence this year if he wanted to put boxing in the spotlight.

Instead, he once again talked about boxers vs. YouTubers.

“The best example is Tyson. 55-years-old and they’re still talking about him fighting either [YouTubers]. Like, that is crazy,” Rogan added.

“And, I don’t know what would happen [if the fight got made].” 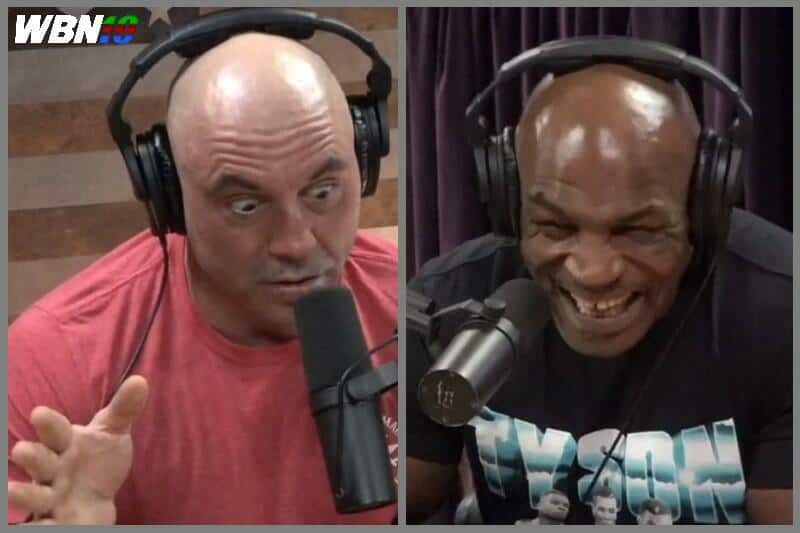 Hopefully, Mike Tyson remains retired and doesn’t step into the ring again. The same could be said about Mayweather, even though we know that won’t happen.

There have been more undisputed champions than there have ever been before over the last few years. This situation is a reason to mention the sport, not Mayweather or Tyson facing a YouTuber.

Nonetheless, thanks to the power of social media, this is where we are, and anyone with a million followers can call themselves a boxer.

Floyd himself began the process of involving non-boxers in 2017 when inviting Conor McGregor to cross codes. It’s been a steady decline since then.