In the headliner, Jason Cunningham will take on the biggest challenge of his career when he goes up against South African superstar Zolani Tete at the OVO Arena, Wembley on July 2, it’s High Stakes, live on BT Sport.

Johnson (20-1, 14 KOs) battles Mikhalkin (24-3, 11 KOs) for the WBO Global light heavyweight title in a fight between two punchers where neither man will want to give an inch.

Meanwhile, destructive lightweight Sam Noakes (9-0, 9 KOs) defends his WBC International Silver title against the Spaniard Marc Vidal (13-2-5, 5 KOs) as the Maidstone man aims to make it 10 stoppages in as many bouts.

Stoke favourite Nathan Heaney (15-0, 6 KOs) will fight in London for the first time in front of a crowd, making a defence of his IBO International middleweight championship.

Cunningham, 31-6 (7 KOs), demolished the previously unbeaten French challenger Terry Le Couviour in Telford in mid-April in what was the second defence of his EBU belt. The Renaissance Man of British boxing will bid to join the elite by taking on the formidable force of ‘Last Born’ Tete, 29-4 (22 KOs), who has been a regular and exciting feature on UK fight cards.

The two-weight world champion last held a world title at bantamweight with the WBO championship belt previously in his possession. Prior to this he held the IBF super flyweight title, won by defeating Paul Butler in Liverpool back in 2015.

A shock defeat to John Riel Casimero in Birmingham in late 2019 prompted a move to super bantamweight and Tete returned to the ring in typical fashion with a first-round stoppage in Johannesburg in December.

The Commonwealth and IBF International super-bantamweight championships will be on the line for a clash that has got the potential to be a FOTY candidate.

Joe Joyce (13-0, 12 KOs) will be getting back into the ring against an established heavyweight contender as he closes in on a September clash with Joseph Parker in what will be a battle between No.1 and No.2 with the WBO. Following a lay-off due to injury, the Juggernaut will return to the scene of his last fight, a sixth-round stoppage of Carlos Takam in July of last year.

A bout of Coronavirus denied Callum Johnson a world title shot against Joe Smith jr in January. After making his recovery, he will go up against former world title challenger Mikhalkin for WBO honours.

The Germany-based fighter was defeated by Sergey Kovalev in 2018 at Madison Square Garden, having previously won and defended the IBO World light heavyweight title, as well as the EBU European title.

Sam Noakes seeks a perfect 10 against Marc Vidal as he currently sits on 9 wins and 9 KOs. Vidal, 33, has previously fought former World champion Kiko Martinez on two occasions – a points defeat and technical draw – and is a former European champion and European Union champion at featherweight.

Nathan Heaney is taking his Stoke City show on the road after overcoming the adversity of a first round knockdown last time out against Diego Ramirez before winning comfortably on the cards.

Wycombe super lightweight Henry Turner (7-0, 1 KO) fighting over six rounds, and Thetford cruiserweight Tommy Fletcher will make his professional debut at the OVO Arena. The Norfolk Nightmare will make his bow in a four-rounder having recently signed with Frank Warren and Queensberry.

“The stakes are high for all the Queensberry boxers in action on July 2nd at Wembley Arena, Live on BT Sport. Jason Cunningham vs Zolani Tete is about as even as matchmaking can be in Boxing and the same can be said regarding Callum Johnson vs Igor Mikhalkin. I’m predicting fan friendly action across both fights in matchups that will get the winners in the mix with the top guys in their respective divisions. 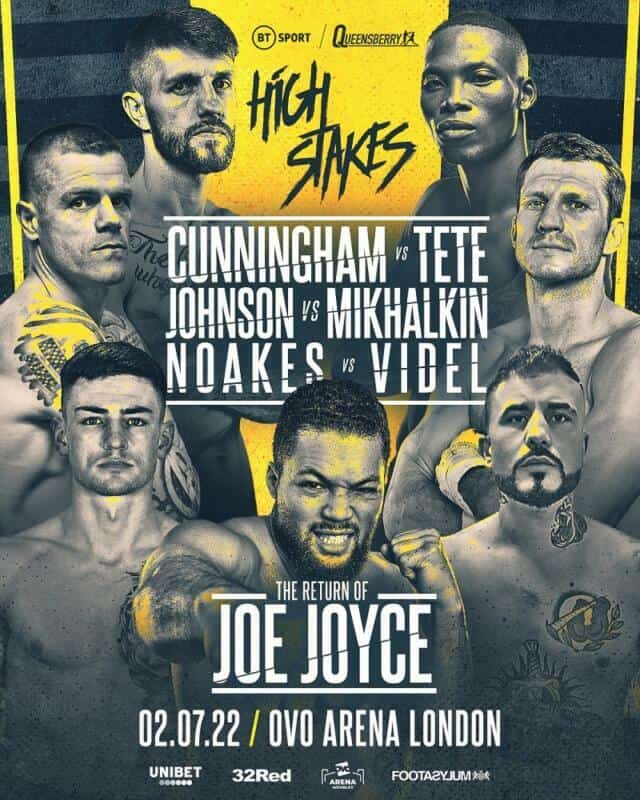 “I’m really looking forward to seeing the Heavyweight Juggernaut Joe Joyce back in action too. Joes had a frustration time since his demolition job on Carlo Takam last year. He’s not been as active as we or he would have liked due to a wrist injury and the delay to his showdown with Joseph Parker. We found out last week that Parker’s training schedule scuppered our plans for them to meet on July 2nd, but it was important to us and Joe that he still fight after such a lengthy layoff with injury.

“The carrot for Joyce is a win on July 2 will set up a massive showdown with Parker in September. He needs to keep his focus, though, and deliver on July 2 as the big opportunities are now there to be taken for the Olympic Silver medallist.

“I am thrilled to deliver Jason Cunningham a massive fight and a huge test against Zolani Tete. Zolani has been with Queensberry for a long time, and we know what a top-class operator he is. Jason had no hesitation in taking the fight because his confidence is high, and he is an unbeaten fighter at super bantamweight.

“This is a fight between two top drawer and experienced campaigners that will bring out the best in each other and provide a treat for the watching public. It is a fight I cannot wait to see.

“The light heavyweight scene is hot at the moment and Callum Johnson will be looking to remind people why he believes he is top dog in the division. It was such a shame that his chance to prove it against Joe Smith jr fell through due to a bout of Covid-19 in January, but his time will come again and winning the WBC Silver title against the tough Igor Mikhalkin would put him right back in the mix.

“I am looking forward to seeing two of our crowd-pleasers in Sam Noakes and Nathan Heaney perform at Wembley.

“As well as seeing the much-anticipated debut of the giant Tommy Fletcher, it promises to be a thrilling night of action not to be missed.”

Tickets for High Stakes at OVO Arena, Wembley on Saturday 2 July go on sale next week, fans are advised to sign-up for Ticket Alerts at frankwarren.com to receive an email ahead of the sale.