Gervonta Davis posted a sparring video showing him getting the better of one of his sessions after his ex-training partner bet he would lose.

“Tank” responded to a wager placed by Ivan Redkach by showing his followers footage of him beating up on Redkach in a snippet of the action.

Davis originally posted the clip when they trained together in 2020, and things turned sour.

Fast forward two years, and Redkach showed his fans a bet he placed on Rolando Romero to beat Davis on Saturday night.

Due to their history, Davis didn’t take too kindly to the gesture by Redkach and re-posted the video displayed here.

A couple of hours later, Davis deleted the footage from his account for some reason.

The WBA lightweight title holder is in the midst of fight week for the Romero clash and has duties forthcoming ahead of the event.

His mind should be on Romero and not some aging beef with a sparring partner. The chances are he realizes that now.

When they fell out, Redkach called Davis out for leaving their sparring session early.

“The deal was for six rounds, but you left after the fourth round. Sad I can’t show my side of this sparring session. My respect to you and your team,” said Redkach.

He added: “You did the best 30 sec of yours and left. Sad I can’t show my side of the sparring because I followed the rules of your manager and didn’t do video.”

Redkach asked Davis for a second chance the following morning. He showed up, and Davis didn’t show.

“I was waiting at the gym for sparring from 10 to 11 am. You didn’t come,” Redkach pointed out. “You know that sparrings take place in the morning.

“I feel bad for our fans that you did not give them a chance to see the real sparring and not just those 30 sec. God Bless You.”

The pair attempted to reschedule again, and it never happened. 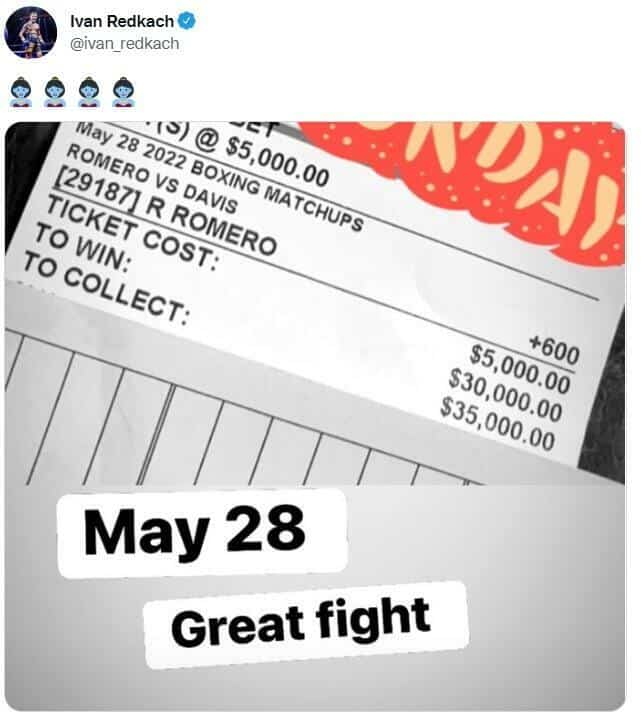 In January this year, they recently got into again with an exchange of expletives, leaving the possibility of a future fight undoubtedly open.

For now, Davis has to take care of business against Romero in what he admits will be his last fight with Floyd Mayweather.

Speaking to Brian Custer on The Last Stand recently, Davis admitted it for the first time.

“It doesn’t necessarily have to be leaving Mayweather Promotions,” said Davis. “It’s about just, you know, becoming that man to handle your own, you know, responsibility, your own priority.

Custer pushed for an answer when saying: “So this is your last fight with Mayweather Promotions?”