The last undisputed heavyweight champion hailing from the UK, Lennox Lewis, had to defend his legacy yet again recently with a startling fact.

As World Boxing News has clarified on many occasions, Lewis was the four-belt ruler at 200-pounds plus back in the day.

Lewis dominated his division despite several other legends competing, claiming the WBA, WBC, IBF, and IBO [meant more than WBO back then] all at once.

Lewis defeated Evander Holyfield, Mike Tyson, and Vitali Klitschko. Not to mention had Riddick Bowe running for the hills.

Therefore, Lewis doesn’t have a blot on his record for debate. He is one of the all-time heavyweight greats.

Lewis fired back when questioned about beating Klitschko, though, a win that saw the Ukrainian stopped in the mid-rounds due to a cut.

“Listen. No heavyweight champ in the history of boxing ever took on the number one contender on ten days’ notice,” pointed out Lewis regarding his last-minute switch-up for Klitschko.

“You can’t get sparring partners of Vitali’s size and skills off the corner. As you see, he turned out to be a great champ. But I had done most solving his puzzle during the fight,” he added.

Listen… no HW champ in the HISTORY of boxing ever took on the No. 1 contender on 10 days notice. U can’t get sparring partners of Vitali’s size & skills off the corner… as u see he turned out to be a great champ. But i had do most solving of his puzzle during the fight. 👊🏾💥 https://t.co/BvaPYnmsu3

Following his clarification on the Vitali win, Lewis also stated he’s level with Muhammad Ali on the most world champions beaten at heavyweight.

Currently, Muhammad Ali is on 14 with Lewis. Holyfield has 12. Larry Holmes and Klitschko both beat 11, according to Lewis.

Then comes Joe Louis on ten, Mike Tyson on nine before George Foreman [six], and Anthony Joshua [five]. Jack Johnson and Rocky Marciano [four] round out the list with Joe Frazier and Tyson Fury further back on three victories.”

Lennox Lewis is undoubtedly happy with his place in the sport’s history books.

“The wonderful thing about history is that the past is available for inquiry, understanding, and explanation. Undisputed is a path for the chosen few.

“It’s a very small exclusive club with an even smaller number of undisputed British champions.

“For now, there is still only one undisputed name listed with the British flag on it in heavyweight boxing. The beauty of this is there is always room for more names to be added. 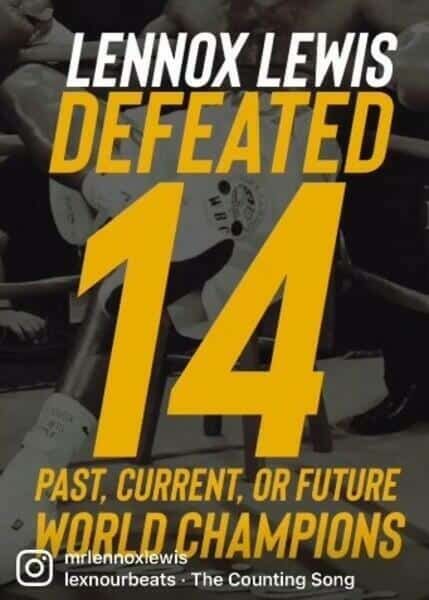 “It’s been seventeen years and three months since I retired. I remain the last undisputed heavyweight champion of the world.

“Time is ticking, and History is taking notes. Stay focused out there,” concluded the British great.