World Boxing News offers a comprehensive list of the top ten heavyweight boxers in the world today, taken from the Pound for Pound Top 50 and beyond.

Known as ‘The Glamor Division,’ two hundred pounds plus, or 224 pounds plus if you are the World Boxing Council, is where the big-hitting action happens.

Knockouts, controversy, and Pay Per View blockbusters take up a mass of column inches as fans remain on the edge of their seats when two of the best around get their groove on.

Sadly, in this day and age, that rarely takes place.

Two of those who recently lit up the weight class are Tyson Fury and Deontay Wilder. The current and former world champions enjoyed a trilogy for the ages from 2019 to 2021.

The pair feature highly on the list, which is a guide to how are the best around at the moment, and those lesser down will undoubtedly feature in the future at the very top level.

Counting down from ten to one, here is WBN’s heavyweight list.

Filip Hrgovic is potentially two fights away from a world heavyweight title shot. A Croatian brute tipped to rule the world.

Undefeated and being guided by the Sauerland Brothers through Wasserman Boxing, Hrgovic has an IBF eliminator against Zhang Zhilei on the horizon.

If he’s successful, Hrgovic will be the number one contender for Oleksandr Usyk’s crown and be one of three fighters ready to claim a shot at the unified title.

The Frenchman has taken a detoured route to the top ten rankings after beating Joe Joyce controversially in the 2016 Rio Olympic final.

A one-year doping ban soured the rise. However, Yoka is still one of the most talented up-and-comers fighters vying for an opportunity at one of the big boys.

The man beaten by Yoka got written off going into a British head-to-head with Daniel Dubois. ‘The Juggernaut’ proved no pushover as he beat up and took out Dubois during the pandemic.

Sparring with Tyson Fury has undoubtedly rubbed off on Joyce, who is looking every inch a world title challenger of the future. It’s just a matter of time.

Knocked out twice by Deontay Wilder, ‘King Kong’ can count himself unlucky to be on the end of two devastating blows from the American.

On both occasions, Ortiz was on his way to a points victory. He even had Wilder reeling on more than one occasion.

But as wise as Wilder was in facing Ortiz twice, the Cuban did enough in both showings since then to be considered one of the best around.

The New Zealander pipped Andy Ruiz Jr. to the world title. He then earned a big-money deal from Matchroom Boxing and Eddie Hearn.

Although he enjoyed a lower-key WBO title reign, Parker’s career has taken off since a loss to Anthony Joshua.

Teaming up with Tyson Fury’s cousin Andy Lee proved a solid move. Parker then dominated a recent fight with Derek Chisora that could have proven far trickier than under any other guidance.

The fact that Fury has beaten Chisora twice himself weighed heavily in Parker’s favor.

Parker is on the cusp of the title picture and should get an opportunity soon.

Ruiz has split his time between celebrating the greatest win of his life and getting back in the ring to concentrate on cementing his place as a former unified world champion. His situation came anoit after knocking out Anthony Joshua in New York.

One win over Chris Arreola is all he has to show for a spectacular underdog win. Still, his short reign is enough to keep him on the fringes of the top four.

Deontay Wilder doesn’t need to get talked up. He’s one of the most exciting heavyweights there’s been for a generation. When boxing needed a lift through the power of KO’s, Wilder was on hand to be that person.

The reign of the two Klitschko brothers had just ended when Wilder burst onto the scene and won his first world title.

Every fan in boxing knows that when “The Bronze Bomber” is around, anything can happen in that ring.

Devastating power coupled with a vulnerability due to his lack of brute strength means Wilder is an icon of his time after a five-year reign as WBC ruler.

As Wilder contemplates his future in the sport, Joshua won’t hesitate. He’s sharing the ring with his conqueror again this summer.

With the tools in his box to reign as champion again, it’s up to the British powerhouse to prove he has what it takes. Now that he’s finally mixing it with the best fighters in the division, he has two losses on his record. 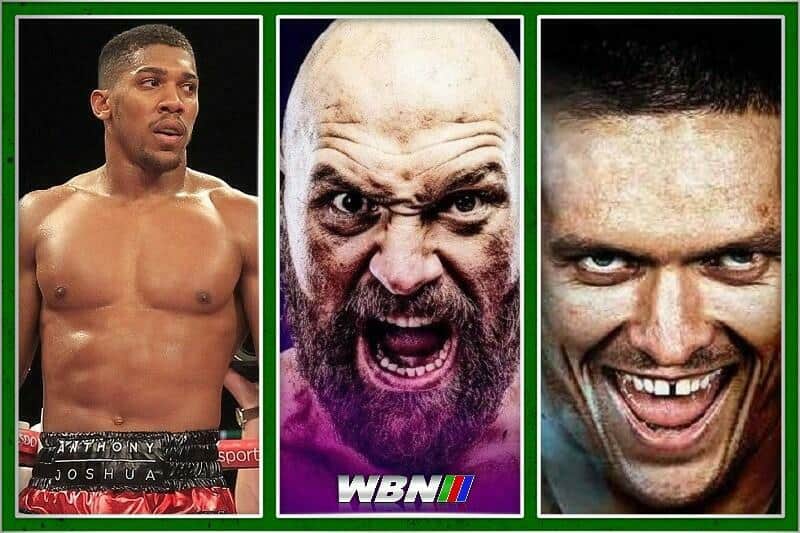 The man who needs no introduction comes in at number two solely due to his opposition since returning to the ring.

Despite facing Wilder three times, Fury’s resume doesn’t resonate at the top, and he only has one solitary title defense despite being a two-time heavyweight king.

For those reasons, Fury is at number two until he defeats Joshua or Usyk.

Oleksandr Usyk is a master of the ring, a two-weight world champion from cruiserweight to heavyweight. Winning all four belts at 200 pounds, Usyk moved to claim another three in the top division against Joshua.

Seven belts aside, Usyk is the most rounded fighter in the sport today. The proud Ukrainian would give Fury more problems than he needs if they met in the ring.

Let’s hope Fury vs. Usyk is next on the agenda, no matter what the sanctioning bodies stipulate.

Alternatively, email your views to contact@worldboxingnews.net.

All thoughts will get welcomed.