Undisputed super-lightweight king Josh Taylor has warned mandatory opponent Jack Catterall that he’s an invincible force ahead of their clash.

The pair go head-to-head for the WBC, WBO, IBF, and WBA belts on Saturday night, with Taylor a considerable favorite.

Despite being undefeated through 26 fights, Catterall is largely getting written off. “The Tartan Tornado” aims to show why that is the case.

“I’m sharp. I’m fast, and I’m quick. I can’t wait to get in there and dismantle Jack Catterall in every single department of the game,” said Taylor.

“I can’t wait to get in there and put on a real top performance Saturday. A real homecoming, the first time I’ve been here in a couple of years now.

“I’m back home. The fans have been starving for a big night for a couple of years.

“I’m determined to put on a good show, keep the belts here, and keep bringing big boxing back to Scotland.”

“I get a great reception every time I’m here. The belts are staying here. There’s no defeating me at the Hydro on Saturday.”

Catterall expects a hostile reception as he prepares for his first world title fight.

“I’d be disappointed if I didn’t get booed on Saturday. If Josh were coming to Chorley, he’d certainly be getting booed. So I expect the same thing coming up here.

“You know what, I’m all for it. This is his town. This is his people. Support your man. I’m coming up here as the enemy. It is what it is.” 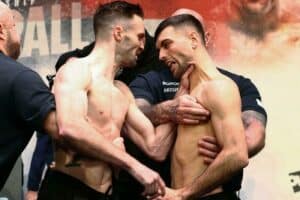 On what kind of fight undisputed Taylor will bring, Catterall added:

“I’m preparing for a hard fight, a long fight, a tough fight. I can’t go into detail on the specifics of what we’re planning on doing in the fight. But I’ve certainly prepared for anything and everything.

“I’ve got to go above and beyond for this fight. Everything I’ve done in all my previous fights means nothing.

“I’ve got to go and put on a career-best performance to beat Josh on Saturday. Josh is at the top of his game. He’s got all the belts.

“So I’ve got to fight with everything on Saturday. Believe me when I say I’m prepared to go to the darkest places possible to come home with that victory.”