Advertisements
Home » Floyd Mayweather: I didn’t become undisputed, but I could have done it

Floyd Mayweather: I didn’t become undisputed, but I could have done it

Floyd Mayweather says he could have become an undisputed champion if he wanted to despite not ever putting four belts together in any division.

The five-weight ruler’s accomplishments speak for themselves now that he’s retired on 50-0 and sitting pretty with a multi-million dollar empire.

But questions continue to be raised against Mayweather by detractors, given that fighters can reach the feat in the modern era.

When speaking about undisputed status, Mayweather mentions a fighter who most believe didn’t secure the significant title in Teofimo Lopez.

‘The Takeover’ was initially thought to have all the marbles at 135. But during preparations for George Kambosos, the fighter stated himself that he wasn’t undisputed.

This scenario led to WBN recognizing Devin Haney as the WBC ruler, as mentioned by Lopez during fight week.

Eventually, Lopez lost to Kambosos on points. The latter is now looked at as only unified.

Despite this, Mayweather gave Lopez props for putting it all out there without a rematch clause.

“I wish these young guys nothing but the best,” said Mayweather on Lopez at the Gervonta Davis Pay Per View event.

“He was an undisputed champion, something I never did. It’s not like I couldn’t have done it, but I didn’t do it. So I’m not going to sit here and bash him or his dad.”

Lopez and his father took heat for their performances during the Kambosos loss. Lopez Sr. faced questions over his instructions given to his son.

Nonetheless, both are sticking together for the foreseeable future after putting out several statements on their intentions. 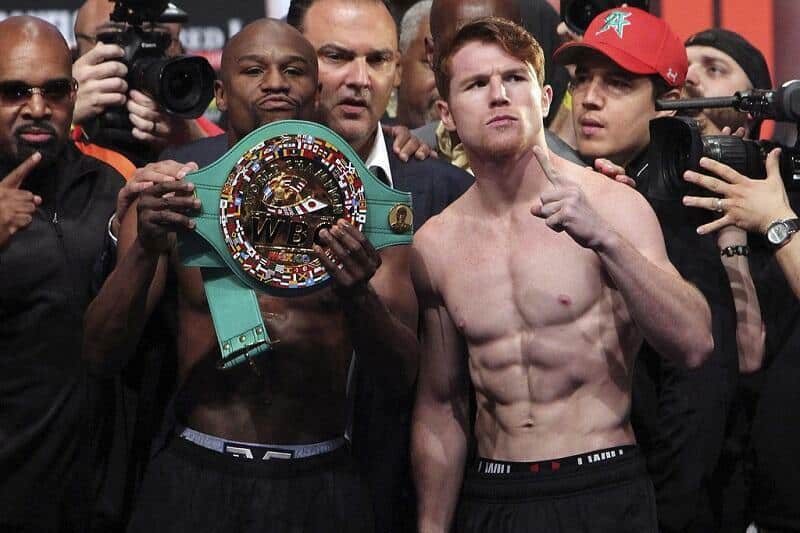 As for Floyd Mayweather, winning the WBC super featherweight title in 1998, just two years after launching his pro career, was an unbelievable feat in itself.

He followed that up with the WBC lightweight crown in 2002 before the super-lightweight green and gold belt in 2005 against Arturo Gatti.

Zab Judah got defeated for the IBF welterweight strap in 2006. Mayweather moved to win his first unification against Saul ‘Canelo’ Alvarez in 2013.

Coming back in 2017 for a cross-codes clash with Conor McGregor boosted Mayweather’s C.V. to the magical half-century.