The IBF, which has been trying to work through issues surrounding the postponed fight between unified lightweight world champion Teofimo Lopez and IBF mandatory challenger George Kambosos Jr., issued its ruling on Monday, which gave Lopez a win on a key point he wanted relating to where the fight would take place.

“After considering the written submissions from both camps, the IBF has ruled the following:
The IBF will not default Triller on the Purse Bid at this time,” IBF president Darryl J. Peoples wrote in a brief letter to the camps, a copy of which was obtained by World Boxing News. “There is no IBF rule that governs the timeframe a bout must take place after a rescheduled bout.

The fight was scheduled to take place as the main event of a Triller Fight Club pay-per-view card on June 19 at loanDepot Park, the home stadium of Major League Baseball’s Miami Marlins, but the show was postponed when Lopez came down with Covid-19 about a week before the fight.

Triller first planned to reschedule the fight on Aug. 14 and then looked to a possible September date before planning to hold it on Oct. 17 in Kambosos’ native Australia.

However, the location led to a dispute between the camps, with Lopez threatening to pull out of the if it was placed in Australia, where he and his team would have been subject to a 14-day quarantine due to the coronavirus pandemic. The Lopez side contended that quarantining would have made it extremely difficult to train properly the bout.

Lopez’s side complained to the IBF, which took the past few weeks to hear from both sides before it issued the ruling on Monday.

“We’re very excited about the ruling. We just want to fight,” Split-T Management’s David McWater, Lopez’s manager, told World Boxing News. “We’re even willing to fight in Australia if they just show us that they have this exception (to having to quarantine). But they don’t have the exception. I think they’re working on it.”

Peoples also wrote in his letter to the camps that “the contracts for this bout must be executed and submitted to the IBF as soon as possible but not more than 15 days following this notification. If Triller fails to submit the contracts for this bout by Tuesday, August 24, 2021, the IBF will
recognize the next highest bidder, who will be given 90 days to stage the bout.

McWater said he has yet not heard from anyone at Triller about getting a new contract squared away.

“If I didn’t call them, I’d never hear from them at all, and I haven’t heard from them,” McWater said. “We’ve tried really hard to be as cooperative as possible on this, but the communication has been all mine. I assume they will (get us the contract). They’ve got a lot going on. I know they’re negotiating a lot of stuff. I’m sure they’ll get to us.”

That Triller Fight Club is even involved in the fight in the first place is a major shock since it does not promote either boxer. But when Lopez was in a dispute with his promoter, Top Rank, over his purse to face Kambosos, they failed to make a deal, which led to the fight being put up for a purse bid.

Triller decided to participate in the auction of the promotional rights and blew away the rest of the bidders with an offer of $6.018 million, a number so big that it beat the two other bids combined — an offer of $3.506 million from Matchroom Boxing, which was bidding in conjunction with streaming service DAZN and Kambosos promoter Lou DiBella, and $2.315 million offered by Top Rank.

Although Lopez remains under contract to Top Rank, he and the company were in significant disagreement over the value of the fight during the negotiations, although have since smoothed things over with Lopez signing an amended promotional agreement that will bump up his minimum purses for fights Top Rank promotes. But Lopez still has an obligation to Triller for the fight with Kambosos first.

Top Rank chairman Bob Arum recently told World Boxing News that Lopez would abide by the Triller purse bid if it puts up the money. If not, and Matchroom Boxing’s Eddie Hearn passes on doing the fight under his second-place purse bid, Arum said Top Rank would do the fight under its bid.

“We’ve talked to (broadcast partner) ESPN, and they’d give us a special date, an additional date, in September to do that fight,” Arum said.

McWater said that if the fight rights wind up with Top Rank and the fight is slotted in September, that is fine by their side. 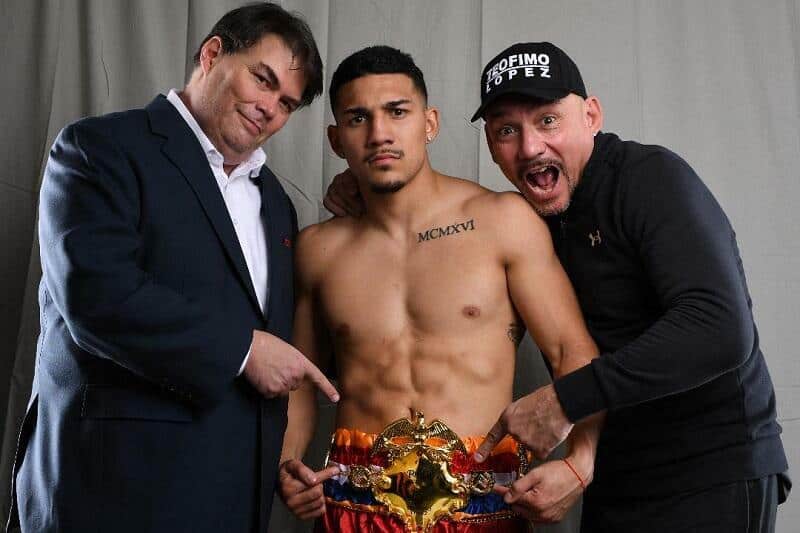 If Triller winds up defaulting, it will lose the 20 percent of its winning bid it has already put up — $1,203,600 — and that money would go to the fighters. It would be split the same way as the purse bid split, which is 65-35 in Lopez’s favor.

In his next fight, Lopez scored the biggest win of his career when he upset Vasiliy Lomachenko by unanimous decision – 119-109, 117-111, and 116-112 — to unify titles on Oct. 17, 2020, inside the bubble of the conference center of the MGM Grand in Las Vegas. Lopez not only retained his IBF belt but also took Lomachenko’s WBO/WBA titles and the WBC’s so-called “franchise” title.

Dan Rafael is the lead boxing contributor for World Boxing News. Follow Dan on Twitter @DanRafael1. Dan Rafael is a full member of the Boxing Writers Association of America.