Fear the heavyweight savage ripping through the Tokyo 2020 Olympics

Bakhodir Jalolov made it to the Tokyo 2020 Olympic Games super-heavyweight semi-finals with another impressive performance on Sunday.

The Uzbeki brute won a whitewash result against Satish Kumar, a fighter who scrapped like a warrior after being injured in his previous bouts.

Kumar was as brave as they come, but Jalolov continued to strike fear into the hearts of everyone in the competition.

What makes things even starker is the fact that Jalalov is already 8-0 as a pro with eight stoppages. However, he could be in line for a world title shot within two years.

Following a shutout decision victory against Abdullayev Mahammad of Azerbaijan in the previous round, the super heavyweight is the favorite to win the Tokyo Olympics.

Jalolov’s bout will get broadcast on the NBC Olympics Website.

Standing six-foot-six, the 27-year-old Jalolov took a break from the paid ranks to return to the Olympic stage seeking gold medal glory. 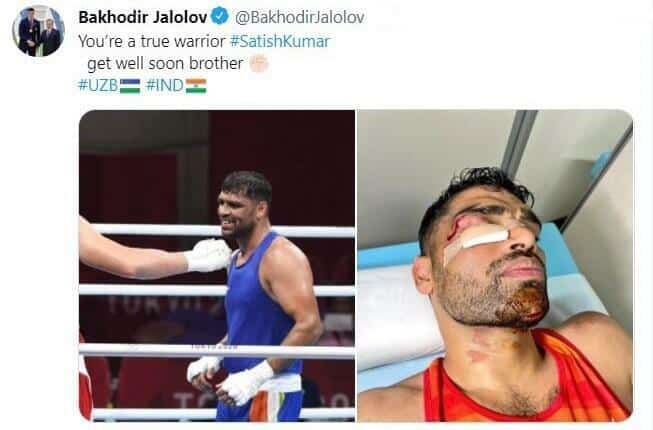 After beating Kumar to reach the semi’s, Jalolov showed class by wishing the Indian boxer well in his recovery. Kumar fought through the ailments and made it to the final bell.

Kumar proved a true warrior against an experienced foe.

He now has the distinguished honor of being the first athlete in the history of Uzbekistan to be the country’s flag bearer at the Opening Ceremonies twice.

Also, he won a medal at the World Cup of Petroleum Countries Tournament in 2014.  Furthermore, numerous National championships too.

During his amateur career, Jalolov also focused on his education, earning a Master’s Degree in Sports Science.