Oscar De La Hoya: “The Kid from East L.A.” vows to rise up against haters

The eleven-time world champion, who was the sport’s most significant Pay Per View star in his day, seems to get it from all angles via social media.

Many of it is self-inflicted due to late-night ramblings. However, the vast majority is vile and harks back to when De La Hoya was in the grip of addiction and a lot worse than he is today.

Spells in rehab have helped the 48-year-old over the years, as these days, only fleeting glimpses of his past problems are evident.

Trolls grasp hold of whatever they can when it comes to De La Hoya, though. His infamous photographs from the past and beef with Floyd Mayweather and Canelo are also in the firing line.

But De La Hoya has come out fighting after more months of abuse. 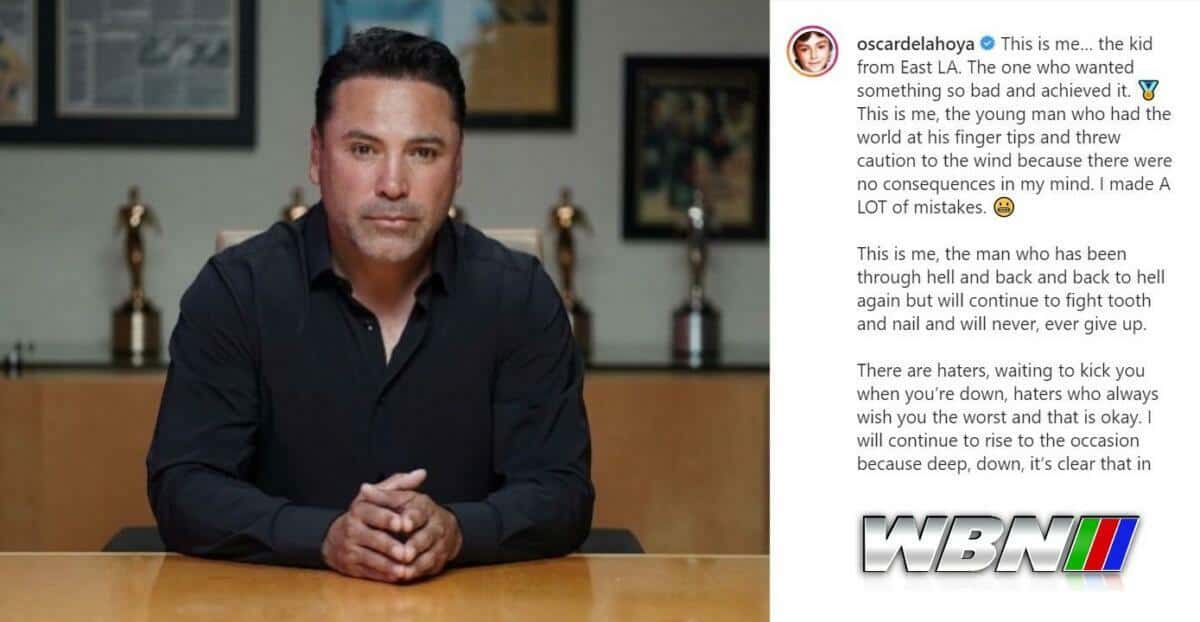 Hitting up his millions of followers, the Olympic gold medalist vowed to fend off the keyboard warriors and emerge once again with his head held high.

“This is me… the kid from East LA,” began De La Hoya. “The one who wanted something so badly and achieved it.

“This is me, the young man who had the world at his fingertips and threw caution to the wind because there were no consequences in my mind. I made A LOT of mistakes.

“This is me, the man who has been through hell and back and back to hell again but will continue to fight tooth and nail and will never, ever give up.

“There are haters, waiting to kick you when you’re down, haters who always wish you the worst, and that is okay.

“I will continue to rise to the occasion because deep down, it’s clear that in this society we live in today, there is A LOT of self-loathing, and it’s easier to deflect and point out others’ mistakes than to look at yourself.

“So, to all the trolls, haters, and those that wish the worst upon me, I wish you peace to the inner most core of you. It’s miserable to live a judgmental life, and to bear that lifestyle is fruitless.

“To those that have supported me and wish me well. I thank you.”

With a date in the diary for a boxing return at almost 50 years old, the boxing world is far from seeing the last of Oscar De La Hoya.