In his latest “Round 12” column, WBC President Mauricio Sulaiman paid tribute to one of boxing’s really good guys.

Boxing has its honor guard of heroes, who are protagonists of told extraordinary tales of faith and courage that inspires us. It shows us in no uncertain terms that no matter how dark the tunnel might be, there will always be a ray of light and hope.

Love is capable of transcending all obstacles. Such is the heartrending but stout-hearted story of Prichard.

A young man who dreamed of being world champion and of hoisting the colors of his homeland Puerto Rico on high. However, fate dealt him something very different.

Prichard was a playful, lively boy but also determined with early formed clear goals. One of them is to become a world champion and leave a worthy great legacy in boxing. To be one of the best students. It is worth mentioning. He graduated with honors.

Determined to follow his dreams and with boxing coursing through his veins, Prichard won five amateur boxing titles before turning pro at age 20, knocking out Xavier Lasalle in the fourth round.

Prichard was a prodigiously talented boxer who was captivated with his skills, but also and notably with his sparkling charisma.

He started his career with 10 consecutive knockouts that quickly positioned him as an exciting and promising prospect.

With this considerable impetus, Prichard was preparing for another great night. He implicitly trusted in the power of his fists. Still, above all, in the meticulously rigorous preparation he had undergone to face Terrel Williams, a rival not considered to be much of a threat.

However, on October 17, 2015, Colón’s life and dreams would take a very different course. This caused a worldwide outcry, with immediate demands for uniformity, requiring referees to follow the guidelines of zero tolerance to “rabbit punches.”

The WBC led the way by creating a special directive in 2016, calling it the “Prichard Colón Rule” as a mark of the greatest respect.

From that fateful moment, Prichard’s life changed radically and dramatically. The twist of fate involved constant anguish and uncertainty, interlaced with acute heartache for his family.

However, hope never abandoned his mother, Mrs. Nieves Meléndez, and takes care of her son 24 hours a day. She also seeks improvement through therapies.

There’s no greater love hath a mother than for her child.

From the first moment, all of us in the WBC resolved to battle with all our might of our beloved Prichard.

Six long years have passed since that fateful night. Even though the doctors have not been entirely positive concerning Prichard’s recovery, his parents’ love, time, dedication, patience, and total, unwavering commitment have performed true miracles, as he has significantly improved.

Thanks to the rehabilitation and all the care they have helped him through. His parents did not lose hope that their son will regain some of the brain and motor functions. They helped him in the toughest ongoing fight of his life.

Prichard’s exceptional courage and love of life have filled many eyes with tears. It’s touched many hearts and inspired multitudes.

His magnificent fight against and confounding the odds earned him the distinction of being named honorary champion of the WBC. 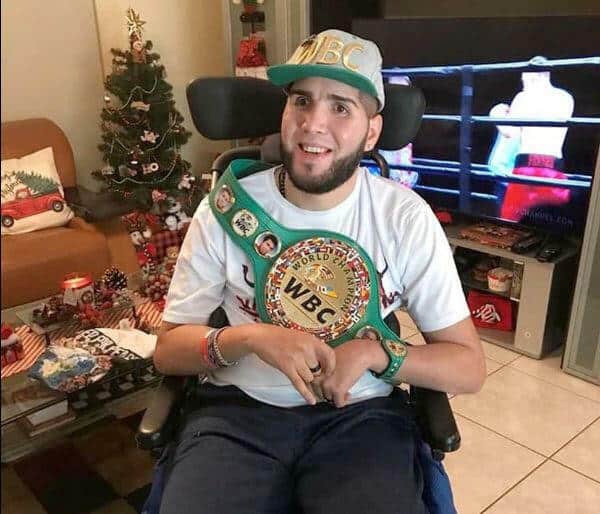 Of course, an accolade entails being the holder of a Green and Gold Belt, which is the crown jewel of boxing.

Since those entrusted and delivering the emblematic belt of admiration, a poignantly emotional delivery was the wife of our beloved WBC member Bismark Morales and Ruth Rodriguez, wife of former champion Rosendo Alvarez.

With all their love and admiration, they tenderly placed the iconic on their chest of Prichard as ambassadors for WBC Cares.

Today, the colors of Green and Gold not only burnish and illuminate the room of our dear Prichard. They also gladden the very heart of his family.

The road has been long and stretches into the distance, they know that they are not alone. We will always be beside them in their corner.

Pritchard is one of our very own. – Mauricio Sulaiman.