Back in 2020, following up on Mayweather’s past admission that Pacquiao would overtake his mark of 23 world champions beaten, WBN decided to crunch the numbers.

World Boxing News says a big sorry to Floyd Mayweather for disagreeing with his statement. He beat 23 world champions and does hold that record at present.

This scenario is another example of why you should never doubt Floyd Mayweather.

Going through both records with a fine-tooth comb, it seems Mayweather counted two victories that flew under our radar. And if you add his two wins over Jose Luis Castillo and Marcos Maidana, that mark could be 25, depending on how you look at it.

WBN stated Mayweather had only beaten 21. We want to admit we were wrong, and here’s why.

Thanks to New Jersey Boxing Hall of Fame President Henry Hascup, WBN noted a couple of victories Mayweather missed off his post when he made the statement.

One that often slips the net for Mayweather is his victory over Gregorio Vargas, who was WBC champion for a brief spell of eight months in 1993.

The Mexican lost his featherweight belt to Kevin Kelley. Vargas eventually faced Mayweather in 2000, losing in twelve rounds for the super-featherweight version.

Tony Pep is another and a polarizing one for some. But Pep was IBO champion two years before facing Mayweather in 1998. 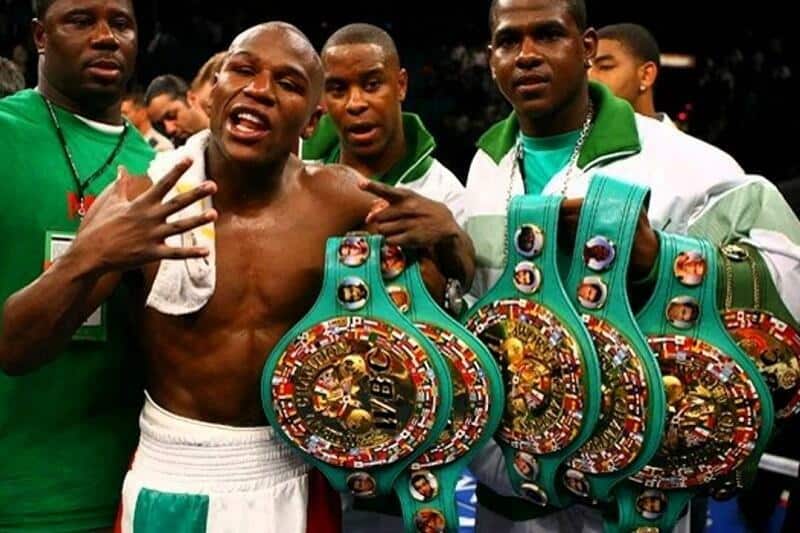 This fact puts Mayweather above Pacquiao by one more than can be reached on August 21 in Las Vegas.

Overall though, and counting rematch wins, the “Pacman” does have a claim in that sense.

Pacquiao has 21 victories over recognized title holders. That number stretches to 24 with second triumphs and 25 if you count Tim Bradley as two victories.

We apologize again to Floyd Mayweather.

Below is a list compiled of all the belt holders the two rivals have overcome.

Mayweather’s world championship career began in 1998, just two years from his pro debut. It lasted a full nineteen years until Andre Berto in 2015.

The “Money” man never suffered a loss, ending his ring stint on 50-0 after beating Conor McGregor in a special cross-codes and sanctioned bout in 2017. 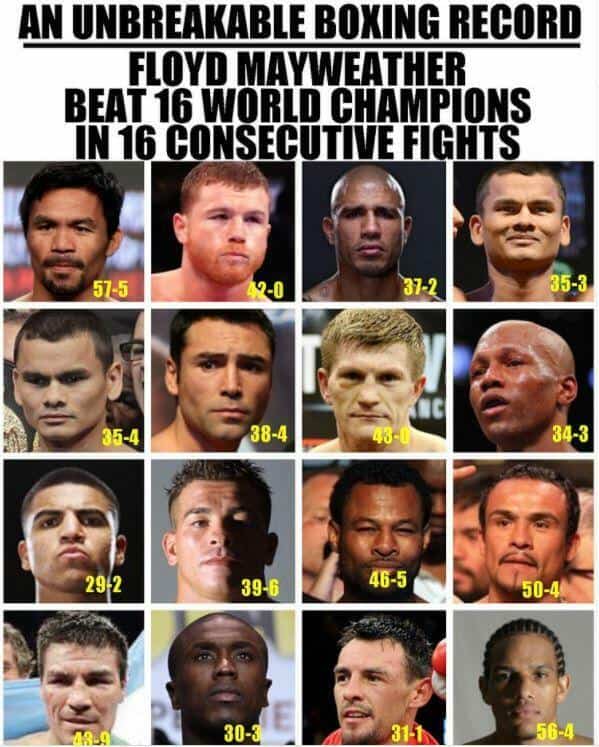 Pacquiao turned pro almost two years earlier than Floyd Mayweather in early 1995. He didn’t fight in a fight sanctioned for a title until two months after Mayweather.

Despite this fact, Pacquiao rattled through the divisions and became a world title-holder at seven or eight different weight classes, dependent on which sanctioning bodies you count.

Even in losing seven times, the 42-year-old has never wavered in his greatness and continues to reign at welterweight – even today.

The pair have consistently been linked to a second fight after their 2015 contest disappointed considerably.

Slight hope came and went in 2019 when Mayweather announced Saudi Arabia talks. They faded completely when the pandemic hit.

As exhibitions enter the boxing world more regularly today, who knows if they will meet again on the new Pay Per View circuit?

WBN would like to thank New Jersey Boxing Hall of Fame President Henry Hascup for his input into this article.