On Saturday, UK boxing blew up as Matchroom promoter Eddie Hearn revealed the prices for his forthcoming “Fight Camp” back garden shows.

The events take place at Hearn’s Essex mansion, as they did last year without fans. This time around, Hearn expects UK fans to fork out around a hefty $1041 [£750] plus fees for the chances to attend bouts on their considerable grounds.

A vast backlash accompanied the announcement as the working class, who regularly keep Hearn’s many UK shows breathing life, will be priced out of the market.

Many say this was an excellent chance for Hearn to show his appreciation for their support by offering them the opportunity to attend what’s become similar to the Matchroom Boxer’s annual barbeque.

“Can’t wait to see the “we’ve all been hit hard by the pandemic” card played by Hearn again,” said one disgruntled fan.

Another added: “Imagine being stupid enough to pay £750 for those cards. They’re terrible. Worse than last year’s Fight Camp.”

Regarding missing a trick, some fear boxing will soon become a rich man’s sport.

“£750 for TKT to Fight Camp cards. Boxing is now just like football. The working class has now been priced out.”

“Eddie Hearn charging £750 to sit in his back garden with a BBQ to watch Conor Benn flatten some geezer who’s lost eight times is a joke. I’m Eddie’s biggest Fanboy out here, but what is this BS.” 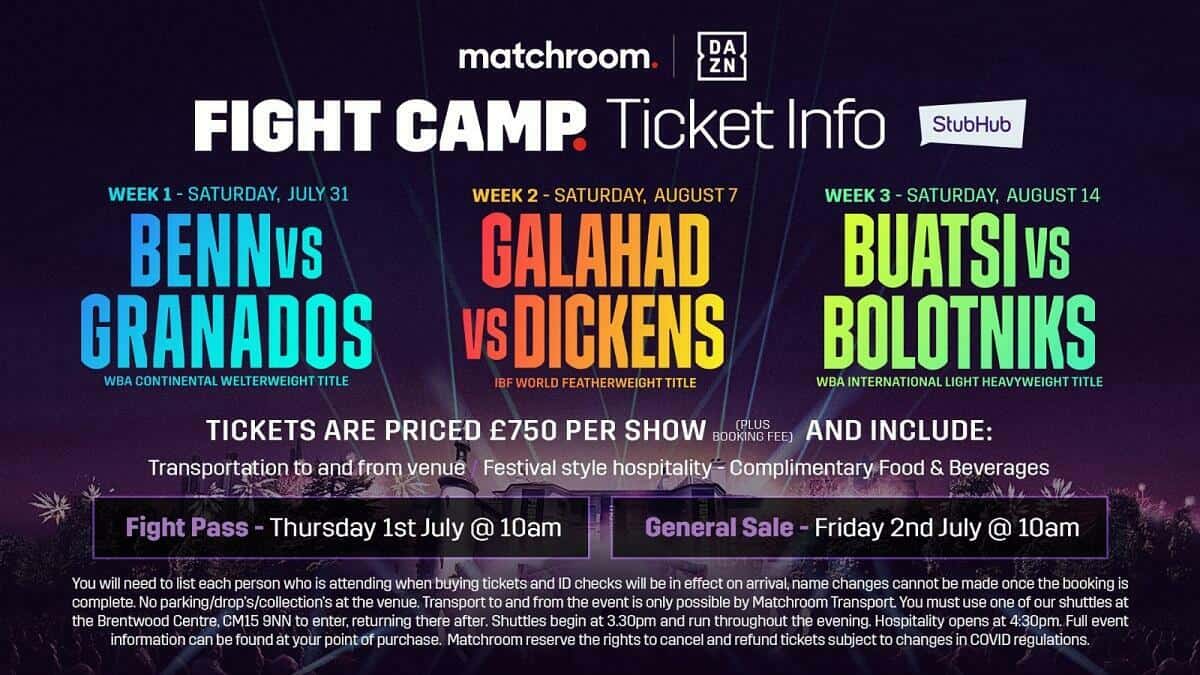 Nonetheless, that’s the price plan as Matchroom gear up for another few weeks in Brentwood at Matchroom HQ.

Tickets will be available to purchase at 10 am on Friday, July 2. Fans can buy General Sale tickets via StubHub (www.stubhub.co.uk)

Matchroom Fight Pass members will be able to purchase tickets via Matchroom Boxing (www.matchroomboxing.com) from 10 am on Thursday, July 1.

All tickets are priced at £750 per show (plus booking fee). They include transportation to and from the venue (shuttle service from the Brentwood Centre). Plus festival-style hospitality (complimentary food and beverages) throughout the night.

Fans can see complete information on the event at their point of purchase.

*Ticket holders can only arrive at the venue via Matchroom transport.