The forgotten man of the heavyweight division, Dillian Whyte, has a long path to finally gaining a shot at the WBC title following his interim victory.

In the process, “The Bodysnatcher” regained his position as the next in line to Tyson Fury’s throne. But there’s a problem.

WBC chiefs are likely to approve Deontay Wilder as Fury’s first mandatory defense, meaning “The Gypsy King” is allowed a voluntary before any meeting with Whyte.

Furthermore, if Fury wishes, he can engage with anyone in the top 15 of the WBC rankings and then pick up his rivalry with Anthony Joshua.

Of course, Fury must come through Wilder again firstly. However, Whyte doesn’t seem to feature in this equation. That’s despite fans of the big-punching Londoner believing Whyte was the mandatory challenger for over 1000 days.

This scenario was never the case.

Sulaiman explained to WBN at that time that Whyte’s reign as mandatory didn’t begin until July 2019. Before that, he was simply number one in the rankings.

“You have to understand that we are not in a situation where we can please every single party. For example, I made a tweet of my daughter, something very positive and nice. But then you got, ‘Give Dillian Whyte the shot!’ – in every single comment,” joked Sulaiman.

“But Dillian Whyte was never mandatory contender until he defeated Oscar Rivas. All that build-up from before when it was 500 days and all those things has no merit.

“We addressed this with Dillian. With Eddie Hearn (promoter) and with his representatives in the right way. 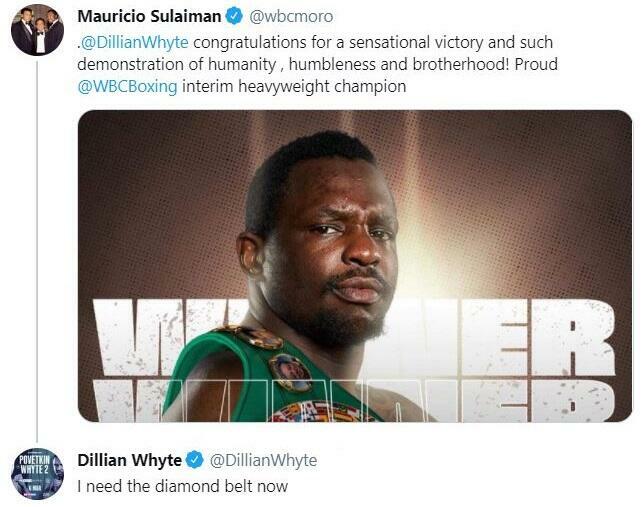 “We met several times, and we offered several alternatives to attend to his wanting to fight for the WBC. And we offered interim titles to get the thing going.”

After holding the mandatory spot for just over a year, Whyte lost to Povetkin. Therefore, his reign began again in March of 2021.

As per the WBC rules and regulations, Fury has a year to defend his belt. He’ll do that against Wilder [give or take a few months due to Covid].

Now, after the Wilder fight, Fury has another year until the mandatory will be due. That timescale takes Whyte up to the summer of 2022 before he can make any noise.

Again, it’s still not that simple.

If Fury so chooses, he can pick up talks with Joshua for an undisputed heavyweight collision as any unification, especially one for all the belts, overrules a mandatory.

The champion is well within his rights to arrange a fight double with Joshua – if he wishes – that would one hundred percent be approved by the WBC.

They may stipulate that the winner must give Whyte his opportunity, but that would still take the interim ruler into 2023.

All in, that’s a long road to travel.

Whyte must try to stay undefeated until then to finally, once and for all, get that coveted green and gold belt in his sights.

Top-ranked contenders Andy Ruiz Jr. and Luis Ortiz look set to fight it out for the number one spot in 2021. Whyte would be best-served trying to secure the winner next year to fully re-cement his place in the WBC’s thoughts.