Eddie Hearn might be a heavyweight promoter, but there was a time in his life when the Essex man wasn’t as well-known in his own country. Amazingly at an Amir Khan press conference, no less.

In January 2018, and despite being the biggest name in UK boxing, Hearn was unwittingly called a bouncer on BBC Breakfast. Fans around the country almost choked on their cornflakes.

Ironically, Walker doubled up as a BBC Sports anchor at the time.

All was going well as Shah spoke over the video pictures from Matchroom Boxing, which were shown on WBN immediately after the incident.

Towards the end of the footage, Hearn was unwittingly brought into the mix.

Shah stated: ‘It’s all part of boxing now, isn’t it, but just look at the size of the bouncer in the middle,” referring to Hearn – Matchroom Boxing’s spearhead since 2011.

Astonishingly, Walker then waded in with ‘he’s a big lad’ before Shah said, ‘yes, a heavyweight!’ 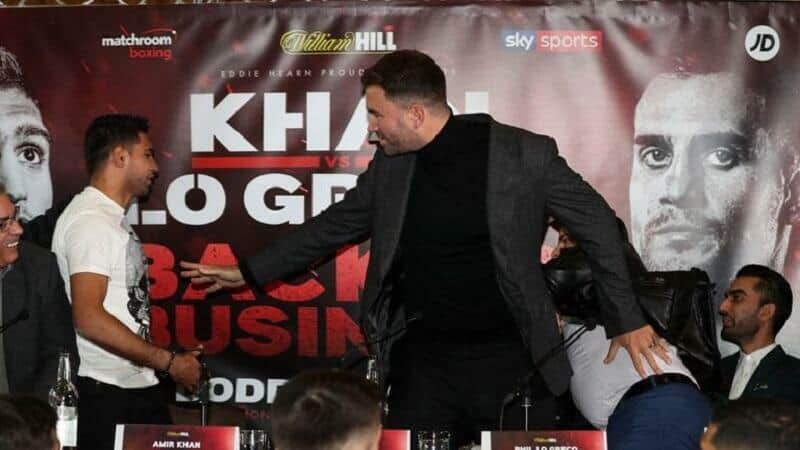 Don’t worry Dan I’ve been called many things, ‘Bouncer’ is not the end of the World ???? https://t.co/07HtJbRzEb

As usual, Hearn saw the funny side on social media as a fan shared the video not long after. Even Walker replied, ‘it was early’ despite having a role on breakfast TV for some time.

It’s all good press for Khan, though on the back of his stint on the ITV reality show ‘I’m A Celebrity’ in December and part of the reason why Hearn agreed on a deal to promote the former super-lightweight champion.

Khan brings attention to whatever situation he’s in, and all news was good news when it came to the Bolton man’s return to action.

On fight night, he took just seconds to take Lo Greco out. So he didn’t need his bouncer after all.