WBC champion Nonito Donaire will be present in Las Vegas as rival Naoya Inoue takes on his fellow countryman in a world title defense that could precede a rematch.

The pair waged war in the World Boxing Super Series final and could be ready to go again soon in a title unification.

At the presser, “Monster” was a man of few words, but his devastating knockouts, climb up the pound-for-pound rankings, and cult hero status among combat sports fans have elevated the Japanese prodigy to main event status.

Inoue will defend his WBA and IBF bantamweight world titles Saturday against Filipino mandatory challenger Michael “Hot and Spicy” Dasmarinas from The Theater at Virgin Hotels Las Vegas. Inoue, who also captured titles at light flyweight and junior bantamweight, is 15-0 in world title bouts and looks to continue his dominance against a man who has not tasted defeat since 2014.

Mikaela Mayer will make the first defense of her WBO junior lightweight strap against former two-weight world champion Erica Farias in the co-feature. Mayer dethroned Ewa Brodnicka last October as the co-feature to the Inoue-Jason Moloney main event. Mayer has her sights on the top names in and around her weight class.

The 10-round featherweight televised opener will see the return of action star Adam Lopez, who will defend his NABF strap against former WBO junior featherweight world champion Isaac “Royal Storm” Dogboe. Lopez has won toe-to-toe battles against Louie Coria and Jason Sanchez since his valiant effort against Oscar Valdez. At the same time, Dogboe returned last July with a one-sided victory over Chris Avalos.

It was crowded dais Thursday, as Top Rank chairman Bob Arum and all six fighters participated in the final press conference.

This is what they had to say.

“Monster is back in the United States, and he’s fighting a tough Filipino. And I know from experience how tough Filipino fighters are. So this should be a very, very enjoyable fight. I can’t wait for Saturday night because the fists will be flying.”

“Basically, {becoming undisputed champion} means I’m the best in that weight class, the bantamweight division. To prove that, that’s why I’m going after all four belts.”

“I’m very happy that the nickname ‘Monster’ comes before Naoya Inoue. I’m very happy and honored, and I’ve taken it in myself as far as ‘Monster’ in the United States as my name.” 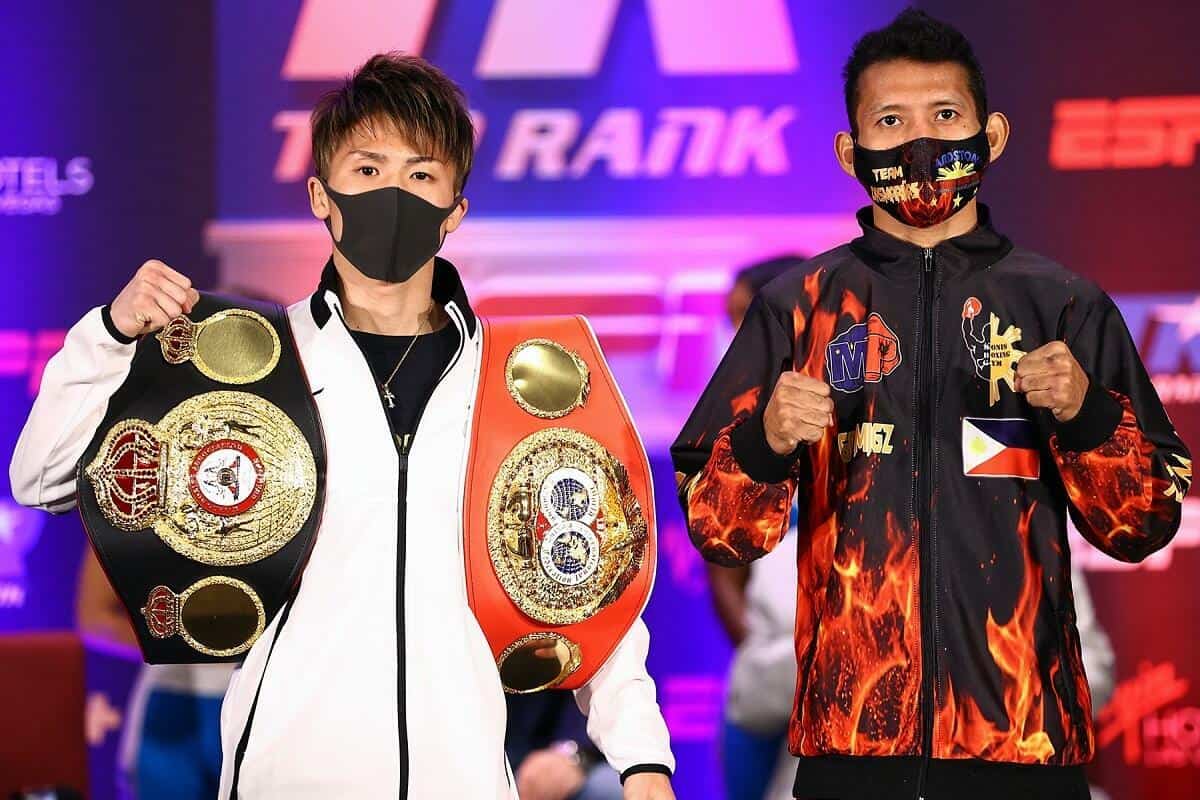 “I did everything I am supposed to do in training, and I am prepared, and I will do whatever it takes to give a good fight to Naoya Inoue.”

“It was a long, hard wait {after winning the IBF title eliminator in March 2019}, but patience and perseverance allowed me to get here. I am thankful to everyone that I’ve been given a chance to fight a great fighter in Naoya Inoue.”

“America has to learn about my very hot and spicy punches!”

“I don’t have anything bad to say about Erica Farias. She has been a champion for a long time. And she fought at 140 and 147, and now she is coming down in weight. She has a ton of experience, but this is a new era in women’s boxing. The experience and the skill that I bring, even though I have fewer fights than her, is on another level thanks to the Olympics and for women being able to fight at the highest level in the amateurs.

“This will also be a test for her. I prepared very well, and we studied her fights. We always go into fights with a good game plan. If she studied my last fight, it’s not going to really help her because, with every single fight, we keep learning and building. I’m looking to become a better fighter every time I go out to the ring.”

“I will take full advantage of this opportunity. I already became world champion in two divisions. Now I’m looking to become champion in the division that I debuted in a couple of years ago. I feel great at this weight.”

“I’m very calm. I’ve been working hard for seven months because I would get another opportunity in a higher weight class. That’s why we took this challenge. We were close to the division since I’ve been working very hard for the last couple of months.”

“This is the perfect name I need right now. Isaac is a great champion. He’s dedicated to the sport just like I am, and I’m excited to show you what I’ve been working on. Tune in. It’s going to be a great fight.”

“That fight alone {against Oscar Valdez} showed me that I got what it takes to be at the top. I took the fight on a day’s notice. But I was going through a lot of management issues beforehand. I was in a shaky spot in my life. I was not 100 percent there mentally, physically, but it was an opportunity I couldn’t turn down. It was a fight I always wanted.

“The way it presented itself was something you never see happen. Nobody comes in 11 pounds heavy {like Valdez’s original opponent, Andres Gutierrez}. That’s unheard of, so I thought it was meant to be. I jumped on it, and I did my thing. I think I showed the world what I got, and that was me on three weeks of training. Saturday night, I got a full camp, so I’m excited.”

“I put everything into this camp. I know Isaac is a tough competitor, so that you will see the best Adam Lopez Saturday night.”

“{You can expect} a firefight as usual. What can I say? I bring excitement. That’s exactly what they are expecting. They’re expecting Isaac Dogboe to come and fight, so I am going to come and fight. Obviously, the fans are looking forward to an exciting fight, and that’s why we’re here. At the end of the day, we want to keep the excitement going. After the fight, they’ll be like, ‘Yeah, that’s Adam Lopez and Isaac Dogboe. That was the fight of the night.'”

“I love working with them, Barry {Hunter} and Boogie {Harris} and Brady. These guys are family. I feel great. At first, I was just supposed to pass through a couple of weeks. I ended up telling them, “You know what, I’m gonna stay.’ That’s how everything began. I feel great. The boys down there are really sharp. They’re motivating me. They keep me in shape. I’ve had a relaxed camp. I feel calm. Saturday, I’m ready to put everything on the line.”

“The best Adam Lopez can also be an undisciplined Adam Lopez. I know he is a great fighter. He’s gonna stick and move. But at the end of the day, sometimes Adam Lopez gets cute in the ring, so we’re looking to exploit that. When he gets a little cute, we’ll let him know that it’s not a time to get cute.”