Tyson Fury is getting serious in his bid to be in tip-top shape for Deontay Wilder by sparring one of the prospects dubbed the “Heavyweight GGG” in Miami.

“The Gypsy King” spent time opposite Olympian Ivan Dychko as both got in a workout at Hollywood Beach in Florida.

Dychko, 30, is a double bronze medalist at the highest in the amateur code and is already 9-0 in the professional ranks. The pair posted about their session on social media.

Fury was relaxing with his family for most of the trip. He did get some valuable rounds in to keep ticking over.

Wilder is back in the crosshairs following arbitration, ultimately ending with Anthony Joshua missing out on an agreed undisputed unification with Fury.

A US judge ruled Fury must complete his agreed trilogy with Wilder first, with the clash set for July 24th in Las Vegas, Nevada.

Regarding Dychko, inactivity due to the pandemic set the hard-punching bruiser back in his quest to be in the mix for a title shot.

He last fought in December 2019 against Nate Heaven, maintaining his one hundred percent knockout record in the process.

Possessing punching power likened to that of countryman Gennadiy Golovkin at middleweight earned Dychko his moniker. But at present, he shares the honor with 15-0 Zhan Kossobutskiy.

Dependent on who you discuss the matter with, both get seen as the top division’s version of the former middleweight king. 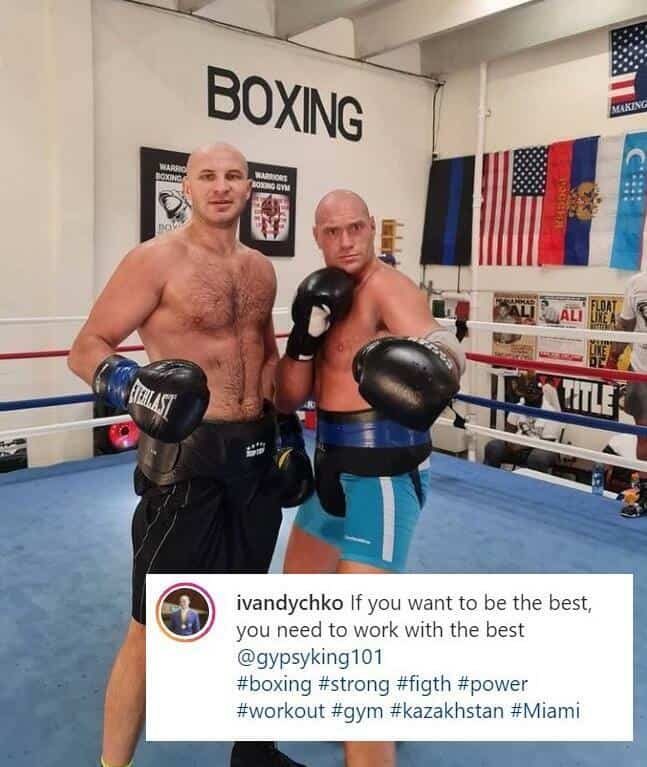 One thing Dychko shares with Fury is his dislike for heavyweight champion Joshua, though. As even when barely scratching the surface at 200-pounds plus, Dychko was already giving AJ both barrels.

“He’s the same fighter he always was,” said Dychko last year. “He gets his world rocked in every fight.

“Then his little bit of power bails him out when his opponents get tired. I know exactly how to beat him. I already did.”

Referring to their 2012 meeting at the London 2012 Games, Dychko was ousted at the semi-final stage by the home fighter in Joshua.

Reports at the time questioned the result.

“Joshua defeated Kazakhstan’s Ivan Dychko by a 13-11 score. The scoring for the fight was very odd, with the judges scoring both the 1st and 2nd rounds.

“Even despite Dychko getting the better of the slow-moving arm-punching Joshua,” mused one report from the arena.

He wants revenge in the future.

“He knows he didn’t beat me then, and Joshua still can’t beat me,” he stated. “Anthony Joshua got a hometown decision and ended up ‘winning’ my gold medal.

“Now is his chance to prove he deserved his success instead of it handed to him. I’m here in great shape and ready to go.”