That’s according to Shelly Finkel, who outlined the situation in a first interview since the stunning turn of events unfolded.

Contrary to reports, Wilder didn’t receive an official package from either Joshua or Fury’s team to allow an undisputed heavyweight battle in Saudi Arabia.

Finkel did state that Wilder would have accepted no offer. He did reveal a number he was willing to put to Wilder, though – $10 million from Joshua.

That would almost certainly have to have been matched by Fury. Meaning it would have taken at least $20 million for “The Bronze Bomber” even to consider waiting for the winner.

“We never looked for a step aside or anything,” Finkel told Sky Sports.

“But on my logic, if it were me and I were in Eddie’s shoes – before the decision – I’m looking at 150 million, plus PPV, plus international TV, whatever. [They were] Probably looking close to 200 million.

“What would it take to say, ‘Hey guys, there is a chance we’ll lose. So instead of making 200 million, let’s offer them something and see if they’re interested?’

“It never came to that. It’s just silly. ‘If it were me, I would have spoken to my fighter and said, ‘Look, instead of making one hundred million, make ninety.’

“That’s a lot more than he’s going to make to fight Usyk [possibly next], for sure. But we hope to disrupt the party.” 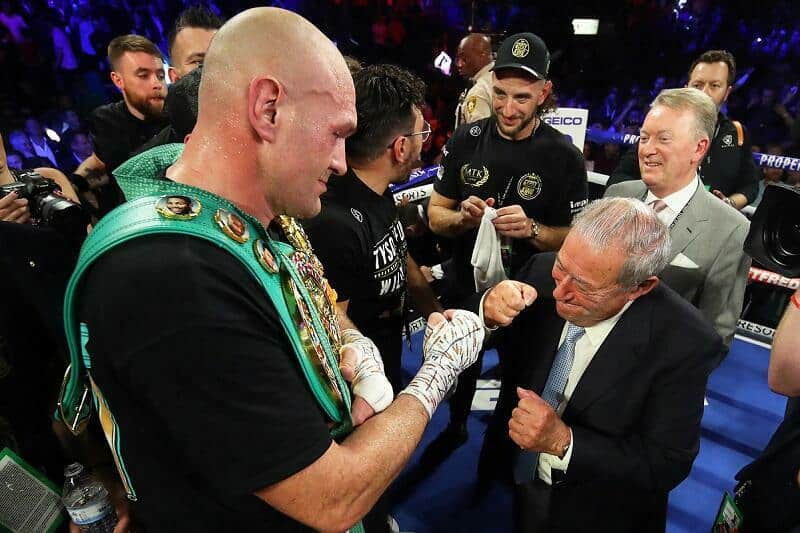 On how Bob Arum, Fury’s US promoter, took the news of the Joshua collapse, Finkel added: “I believe he [Arum] was shocked. He really would have preferred to have the Joshua fight.

“As soon as things in court looked a little bad for the decision, I assume he put some things on hold.

“He was still hoping for the fight in Saudi Arabia. We did not want anything but the fight. It was obvious,” concluded the New Yorker.

Now, Deontay Wilder is looking forward to battling Fury for the third time in Las Vegas this summer. The fight will be even more significant than the rematch.

Arum exclusively told WBN last year that the fight sold close to 1.2m worldwide Pay Per Views, including online sales, the best US effort in some time.

They also broke the gate receipts record for a top division bout staged at the MGM Grand. This scenario means an attendance expansion is possible.

If both sides want to offer fans more tickets than the first, the T-Mobile Arena or the Allegiant Stadium could be in the frame for July 24.