Despite weighing just 130 lbs., Harris (3-0, 3 KOs) stands an imposing 6’ tall and, with his incredible punching power and above-average hand speed, reminds many of the great Thomas Hearns.

The 24-year-old is a native of Cleveland, but now lives and trains in Atlanta. A born fighter, Harris was a latecomer to boxing and had only 15 amateur bouts before close friend and multi-weight world champion Gervonta Davis convinced him to take his heavy-handed style to the professional ranks in 2019.

“When I was younger, my dad would always bring up boxing to me, but I never went into a gym. I was into other sports,” recounted Harris. “One day, when I was 19, I decided to go to a gym and try it. My first time going, I wasn’t very good, but I liked it and just kept going and I got pretty good pretty fast.” 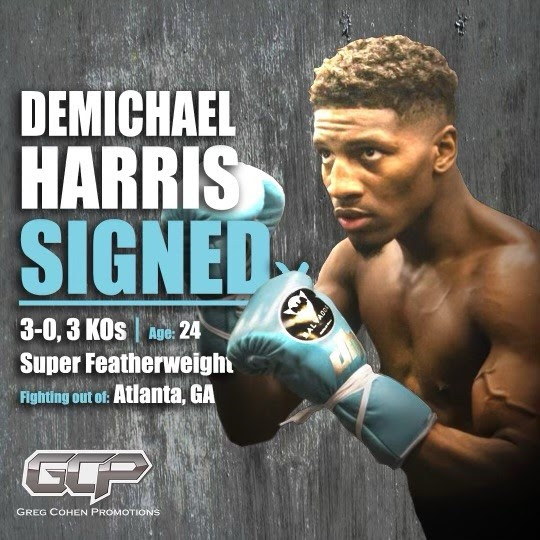 Harris went on to fight on the undercards of two of Davis’ high-profile title fights and is already generating strong buzz for his immense size and pulverizing power. Signing with Cohen, Harris says, is a key piece of the puzzle toward winning a world championship like his friend Davis.

“It’s a great opportunity and I’m very excited to work with him,” said Harris of Cohen. “I hope to get my name out there and be named Prospect of the Year next year. That‘s what I’m aiming for. I think I can do it.”

The hard-working Harris recently spent time with former featherweight champion Shakur Stevenson but does most of his preparatory work at Champs Boxing and Fitness in Atlanta with his long-time coach and father figure, Pete Crumpley.

Crumpley, a friend of Cohen’s and a former fighter himself, says Harris was showing signs he was something special from very early on.

“I remember when he first came to the gym,” he recalled. “I noticed he had a great jab for a kid just starting out and pretty soon he was sparring with pros all the time and giving them good work. He would stop some of them with body shots. He liked going downstairs and everybody he hit to the body would quit. And for him to be able to work with Shakur in camp when he’s just a 3-0 pro with only 15 amateur fights. That says a lot. I think he has the potential to be a world champion.

“I think he can compete with the best of them right now,” Crumpley continued. “Some fighters are born with it and some are taught. DeMichael is an animal. When you find a kid who can punch with his amount of heart and guts, it’s something very special. He’s literally willing to do whatever it takes to win a fight.”

Promoter Cohen, who has taken a number of unknowns to the boxing promised land, says Harris impresses him with his physical gifts and his seemingly unending heart in the ring.

“He’s got unbelievable power and he just keeps coming,” said Cohen. “He soaks up knowledge like a sponge and he’s also got a very strong chin. It’s going to be hard for anyone in his weight class to do anything with him. He’s a very quiet guy outside the ring, but he turns on a switch when he fights, and he wants to kill you.”

Cohen says Harris will make his GCP debut on June 12 in Chattanooga, against an opponent to be named soon.