World’s Strongest Man winner and former Game of Thrones “Mountain” Hafthor Bjornsson got hurt during a heavyweight battle over the weekend.

The wannabe boxer, who lost 100 pounds in weight to prepare for the contest, looked far better than his last bout against Steven Ward.

Facing Simon Vallily this time around, Bjornsson had clearly learned from his debut exhibition performance.

Leaner, meaner, and a lot more measured, Bjornsson was able to put his opponent on the canvas twice. Down once himself but ruled a slip, the Icelandic giant was hurt on a couple of occasions.

That’s to be expected when going up against real professionals, though. It all goes in the tank for his impending clash with Strongman rival Eddie Hall.

Bjornsson vs. Hall is scheduled to take place this September in the boxing capital of the world, Las Vegas.

After gaining more valuable rounds, Bjornsson is sure he can put Hall on his behind when they eventually collide. 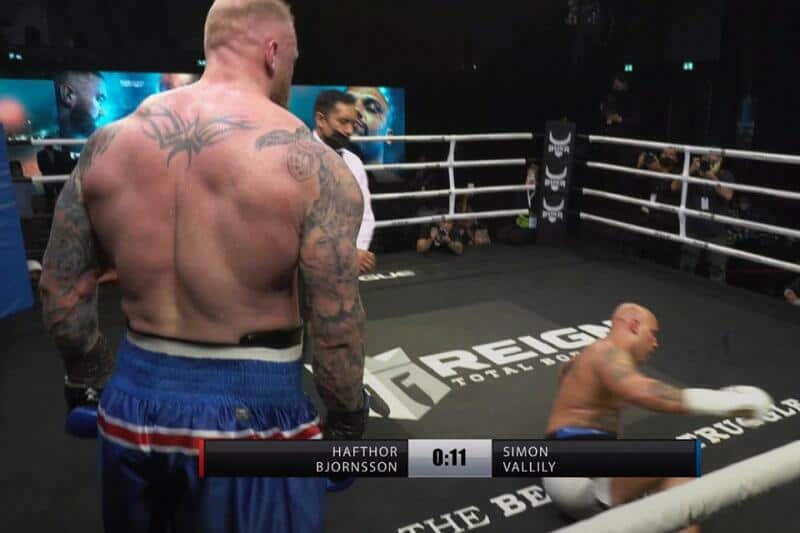 “Simon was a good opponent to me. This was good to test my chin as well as my ability to fight in the ring against a professional,” said Thor.

“He gave me some good shots, good hooks that landed well. I was very happy with my performance.

“I promise you I’m doing everything I can to knock out Eddie Hall in September,” he added.

Assessing how well Bjornsson is doing in his quest to enter the boxing world, Vallily stated: “He’s awkward, he’s a big man, getting physical.

“I saw his last fight [against Ward], and credit to him, he’s come on a lot. He’s got a lot of potential ability, and I’m not just saying that.”

Hall is preparing away from the limelight but has previous experience in the ring. Fans can witness the event on YouTube.