Anthony Joshua must give the WBO a confirmation that he is willing to face mandatory challenger Oleksandr Usyk or be stripped of the title.

In a letter dated Wednesday, Joshua and his promoter Eddie Hearn were informed that the Usyk fight must be next. The decision followed the collapse of unification with Tyson Fury.

The information, which WBN posted through Lead Contributor Dan Rafael, reads as follows:

It must occur on or before September 15, 2021, unless both parties agree to a further extension.

The award issued by the arbitrator is binding and enforceable between the relevant parties. Conversely, as you are aware, on January 29, 2021, the WBO World Championship Committee ordered the commencement of the negotiations for the Interim Heavyweight Championship Contest between Usyk/Joyce to keep the division active.

To seek the protection and safeguard the rights and interests of Usyk and the remaining WBO Heavyweight Contenders considering the potential Undisputed Heavyweight Championship bout between Joshua/Fury. 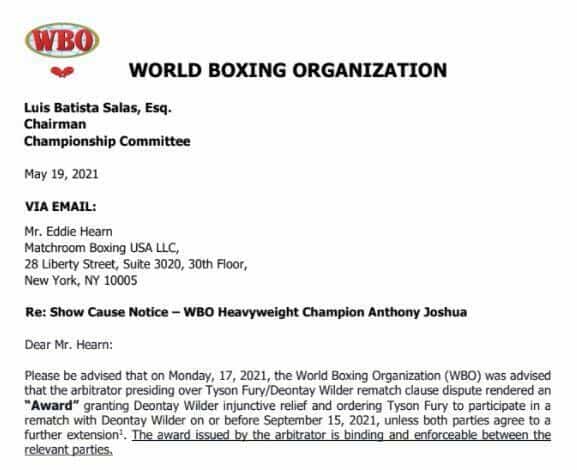 Such ruling was subject to particular conditions, including but not limited to the WBO Championship Committee’s right to issue any further ruling or determination deemed necessary, helpful, and convenient to establish the purposes, policies, and intent of the WBO Rules and Regulations.

Wherefore, considering the foregoing, and per this Committee’s right to issue any further ruling or determination per WBO rules and regulations, it is hereby ordered to “Show Cause” within
the next 48 hours upon issuance of this order. The WBO World Championship Committee shall not order the commencement of negotiations between Mandatory Challenger Oleksandr Usyk and WBO Heavyweight Champion Anthony Joshua immediately.

Be advised that failure to comply with this order will constitute a waiver of all rights hereunder. With the Committee proceeding accordingly without a further summons and/or hearing.

Joshua must give the WBO his answer in the coming hours.