The respected Boxing Writers Association of America released the 2020 round of award winners this week, including a nod for World Boxing News Editor Phil Jay.

The 2020 BWAA writing contest’s 211 total entries in six categories shattered the previous record of 149, set the year before.

Stradley, an author of three well-received books on boxing, was the only two-category winner. He took firsts in Event Coverage (“Mike and Roy battle of the aged,” for DonStradley.blogspot.com) and Feature Under 1,500 Words (“The Reinvention,” for The Ring).

Tying Stradley for first place in the latter category is Diego Morilla (“A tale of Christmas in Wonderland,” for The Ring).

In addition to his two firsts, Stradley also had third place in News Story. Plus an honorable mention in Column.

That gave him 13 points on the scoring system. Places are awarded five points for a first, three for a second, two for a third, and one for an HM, edging Greg Bishop of SI.com, who had 12 (a first, two seconds, and an HM).

Other first places went to Bishop in Investigative Reporting (“Clifford Etienne would like to paint you a picture,” SI.com).

Lance Pugmire in Feature Over 1,500 Words (“In the name of the father: How Deontay Wilder learned to lead by example,” The Athletic).

Norm Frauenheim in Column (“Defiance not enough to keep Coronavirus off an island or the UFC on ESPN,” 15rounds.com).

Joseph Santoliquito for News Story (“Dealing with death: The courage and compassion of Charles Conwell,” RingTV.com).

Santoliquito was the most-cited writer, with a first and four HMs. Stradley and Bishop each placed in four categories and Pugmire in three.

In the boxing column category, World Boxing News Editor Phil Jay was given an honorable mention for his “MIKE TYSON, YOUTUBERS, AND THE POPULARITY OF AN IMPURE BOXING SPECTACLE” musings. 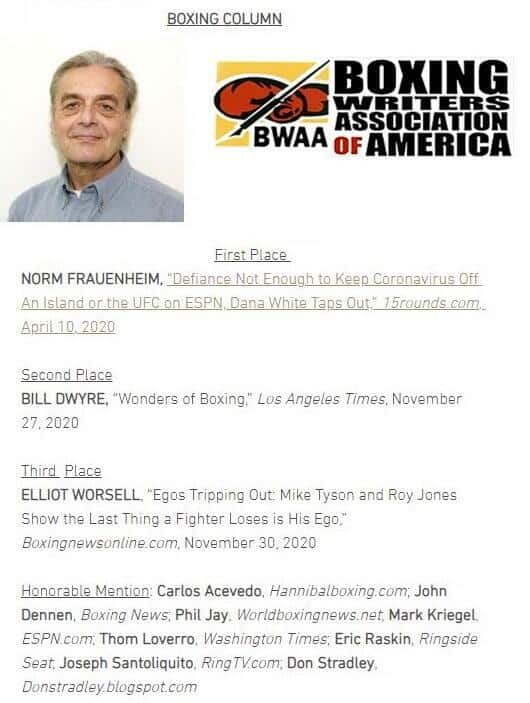 NORM FRAUENHEIM, “Defiance Not Enough to Keep Coronavirus Off An Island or the UFC on ESPN, Dana White Taps Out.” – 15rounds.com, April 10, 2020