Granite Chin Promotions has announced it will host the inaugural “Granite Chin Invitational” as part of a Pro-Am card, featuring elite amateur boxers from throughout New England, as part of another day-night doubleheader on June 26th at New England Sports Center in Derry, New Hampshire.

Two winners in each competing weight class of the June 26th “Granite Chin Invitational” semifinals round, marking the first N.E. amateur tournament since the COVID-19 pandemic started more than a year ago, will advance to the August 26th championship final at the same venue. Several open-class amateur matches will also be held during the afternoon segment of this novel twin-bill.

The “Granite Chin Invitational” is sanctioned by USA Boxing. 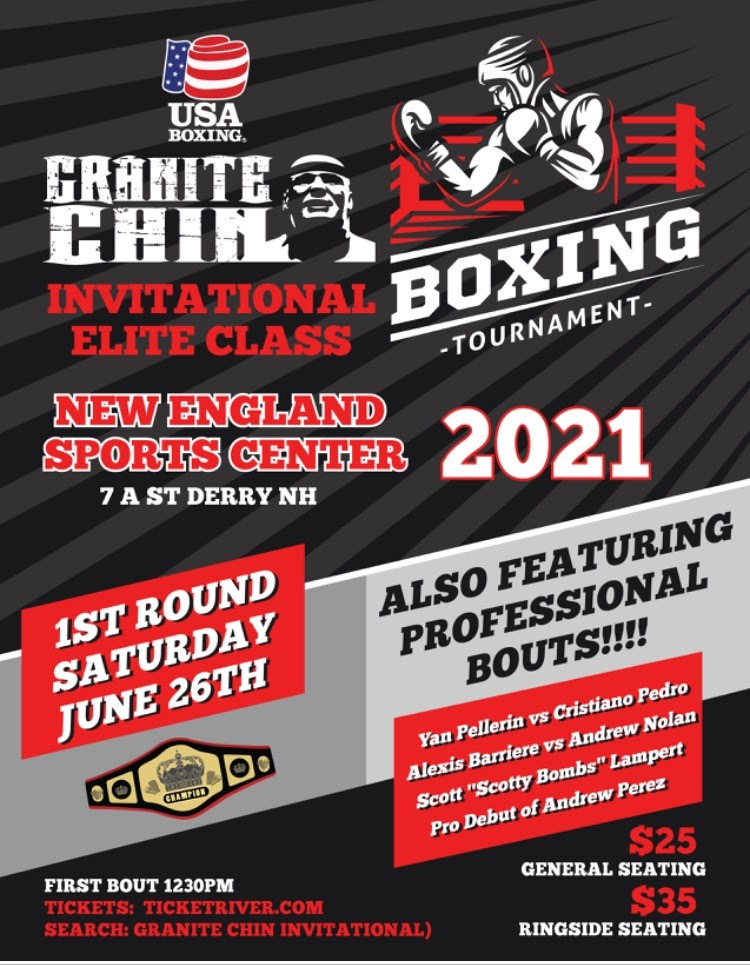 “I am excited to be hosting an open class tournament in 2021,” Granite Chin Promotions president Chris Traietti. “Once I found out that the New England Golden Gloves was canceled, I felt obligated to do something for amateurs, especially open class boxers with national aspirations, Our tournament may not have the same prestige as the Golden Gloves, but it will give local amateurs a chance to see who the best in New England at their respective weight classes. We recently decided to add pro bouts to the day show as well. Like our last show, we want both shows to be packed with exciting bouts.”

Tickets go on sale this Monday (May 17) and are priced at $25.00 (Day Show) / $40.00 (Night Show) for general seating (unassigned). Unassigned ringside seating will be available at $35.00 per seat during the day show. The night show will offer ringside tables (assigned and seats 4) for $300.00 and are available to purchase online at www.ticketriver.com (Search: Granite Chin Invitational for the day show, Breakout for night show).