The undefeated young talent from Smithborough, County Monaghan, has been racking up the rounds with Taylor this last week in Las Vegas before the two unified World Champions collide in one of the biggest fights of the year on Saturday 22nd May.

‘The Hitman’ has previously shared two training camps with Ramirez where he sparred nearly 100 rounds in total with the American, which has given the fast-rising young star plenty of crucial and valuable learning experiences as he makes rapid progress in his own career.

McKenna won’t be at the fight, though, as he has his own fight lined up on the same night back in the UK when he features on his promoter Mick Hennessy’s big show at the Coventry Skydome Arena, headlined with the all-out war between Sam Eggington and Carlos Molina for the Vacant WBC Silver Middleweight Championship, live and free on Channel 5.

Along with father and trainer Fergal and younger brother and top undefeated super-welterweight prospect Aaron, the fighting family first went to Mexico to train before heading to Los Angeles and then finishing off in Las Vegas.

McKenna is now desperate to get back in the ring with his last fight in December ending in a third round knockout of Devon’s durable Des Newton and hopes to show off what he’s learnt and the improvements made from his sparring with Taylor.

He said, “It’s great to be a part of Josh’s preparations for his fight with Jose Ramirez and it’s fantastic work for me to get in there with someone of Josh’s calibre, a man who’s a unified World champion and going for all the titles. It’s brilliant experience for me and I couldn’t be getting any better work in the gym than with him and I’m really in top form for my fight on May 22nd,”

“I’ve also sparred with Ramirez for a few training camps so I’ve been in the ring with the both of them. They’re two different style of fighters and its going to be a cracking fight and a fight of the year contender, no doubt about it, I’m really looking forward to it. It’s hard to say who’s going to win it but all I know is that it’s going to be a great, great, fight.”

“With Josh I’ve done nearly forty rounds and with the two training camps with Ramirez, nearly eighty rounds, so I I did a lot of work with Ramirez also, he’s a great fighter, the same with Josh. I know that I can go in and mix it with these guys and I’m up there at that level, I’m just really looking forward to getting up to the next level and then fighting for world titles.”

The 24-year-old has raised eyebrows with his ice-cold demeanour and frightening display of power-punching that has seen him establish a perfect seven fight record with seven knockouts. All of his wins have come inside five rounds with four of those in the opening round that has singled him out as one of the best and most exciting young fighters to keep an eye on in 2021.

McKenna continued, “I’m getting all the experience I need in the gym, when I go into a fight I go in there to knock people out and get the job done. I’m not really interested in going rounds in fights because I’m getting it in the gym sparring with world class fighters and I have been for the last couple of years to really learn the the game. Anytime I go into fight I’m going in for the knockout,” 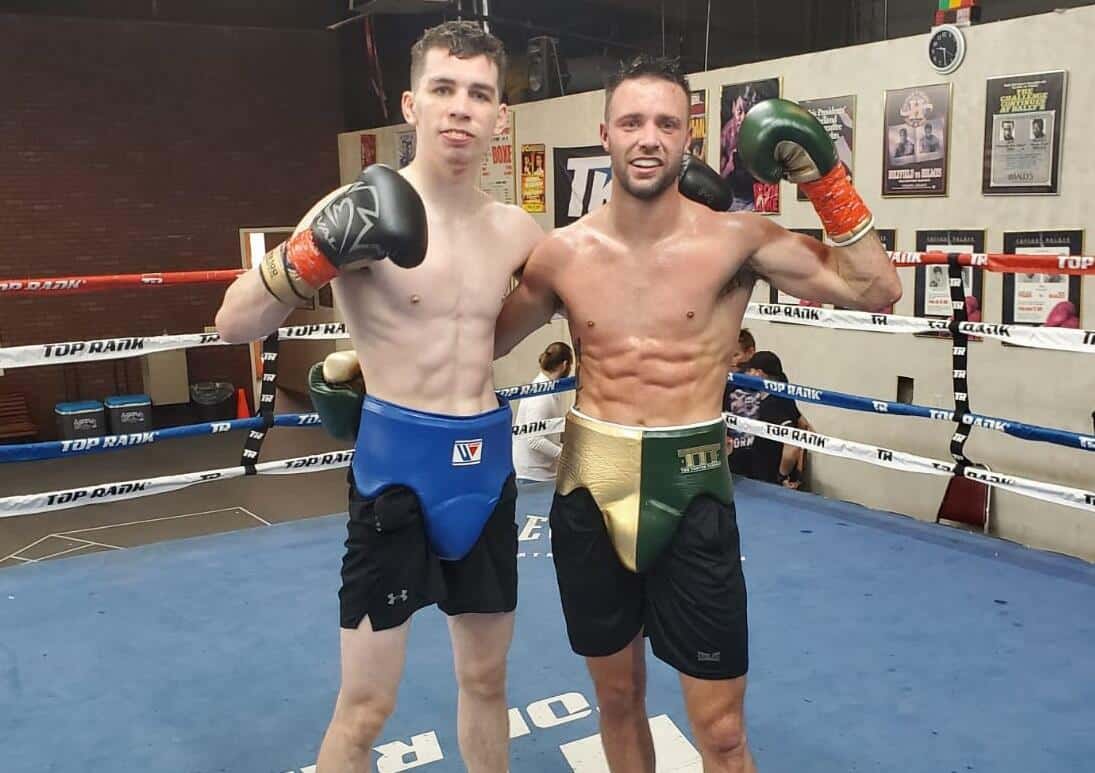 “Just sharing the ring with Josh, he’s a different style of fighter to Ramirez, he’s a southpaw and very sharp. It’s about adapting to change my style of fighting, I can box on the front foot, I can stand off, I can change. I have many different ways of fighting different guys, southpaw or orthodox, I can box when I need to box and fight when I need to fight, it’s just about learning from Josh and seeing what level I’m at to be sharing a ring with him,”

“I’ll be heading back to Ireland on Sunday. On this trip we’ve been to Mexico, LA and finished in Vegas. I’m in the best shape of my career, I’ve improved so much, I just can’t wait to be back in the ring and live on Channel 5.”

Fergal is delighted with the trip and believes the experience will have benefitted his son no end as Stephen’s career steps up towards Championship contention. He said, “Stephen has been a benefit to Josh, he’s similar to Ramirez with his aggressive nature. When you bear in mind he helped Ramirez prepare, Stephen’s in a unique position to know both fighters, Ramirez is rough and rugged whereas Josh is very technical and has the speed,”

“It has given Josh a good opportunity to practice for the fight. It’s really interesting to see how Josh prepares and handles things and it’s another learning experience for Stephen to be mixing in this calibre. It’s only a matter of time until Stephen’s there at the top,”

“This was a real good move for us to come down to Vegas to get Josh. It was getting a bit stale in LA, no one wanted to spar and they were asking for money to spar with Stephen. When we got the offer to come down and spar with Josh, we said we’ll take it as it will fix the problem we have and we tied in with another gym to accommodate Aaron,”

Presented by Hennessy Sports in association with William Hill, Infinitum, Numan, Everlast and King Carlos Promotions, Eggington v Molina will headline the exciting nine-fight card exclusively live and free-to-air across the UK and Ireland on Channel 5.

Also on the card, Coventry sensation River Wilson-Bent (8-0-0, 4 KO’s) makes the first defence of his Midlands Area Middleweight title against Derby’s George Farrell (5-0-0, 1 KO). Former British Light-Heavyweight Champion Shakan Pitters (14-1-0, 4 KO’s) has his first back against Bradford’s Jermaine Springer (7-2-0, 1 KO) in an eight-rounder since losing his title to Craig Richards last December. County Monaghan super-lightweight dynamo Stephen ‘The Hitman’ McKenna (7-0-0, 7 KO’s) features in a six-rounder, but the undefeated red-hot 24-year-old prospect has not needed to go the distance yet with all his fights ending inside. Birmingham middleweight bombshell Idris ‘The Bodybreaker’ Virgo (9-0-1, 1 KO) goes in over six-rounds. Sevenoaks all-action super-welterweight Michael Hennessy Jr. (5-1-1) is in a six-rounder against Warminster’s Paul Cummings. Irish super-welterweight ace Brett McGinty (1-0) follows up his thrilling pro debut last December when he features in a four-rounder against Birmingham’s Josh Hodgins. Brighton heavyweight talent Tommy Welch (1-0-0, 1 KO), son of the former British, Commonwealth and World Heavyweight title challenger Scott, follow’s up his explosive debut last December when he stopped Matt Gordon in the second round and features in a four-round contest.