Tomlin will make his DiBella Entertainment debut in a special attraction eight-round bout on Friday, May 14, 2021, in Murfreesboro, the sports capital of Tennessee, featured on Broadway Boxing Presents: Ladies Fight. Tomlin’s bout will not be streamed on UFC Fight Pass®, so local fans wishing to see his fight are encouraged to buy tickets well in advance to ensure entry.

Tickets, starting at $35, are On Sale Now and can be purchased online at Broadway Boxing Tickets. Fans wishing to support Team Short Fuse should purchase seats or tables labeled “Tomlin.” The event is co-promoted by Matt Young’s Tri-Star Boxing. Embassy Suites by Hilton Nashville SE is located at 1200 Conference Center Boulevard, Murfreesboro, TN 37129, just outside of Nashville, TN. Doors will open on the night of the event at 6:30 p.m. local time.

“Over the last 18 years, Broadway Boxing has become a global brand and I am so excited to bring the series to Murfreesboro on May 14,” said Lou DiBella, President of DiBella Entertainment. “Tyler Tomlin is already a star in Tennessee and has the potential to carry his stardom onto the global stage. Starting May 14, we will begin the process of making Tyler Tomlin a prominent name in the boxing world. Cheatham County has my word, he will not forget where he came from and will continue to be active in the Tennessee boxing scene.”

Just 21 years old, Tomlin has already made a huge splash on the Tennessee boxing scene since turning professional in May 2019. He has won his first 10 bouts, while cultivating one of the most loyal and passionate fan bases anywhere in professional boxing. Tomlin began boxing at age nine and was a touted amateur, compiling a 65-15 record. He won gold at the Tennessee Golden Gloves and Silver Gloves tournaments six times each, became a four-time Regionals champion, and won bronze at the 2015 Junior Olympics. He is trained by his father, Darryl Tomlin, at the Team Tomlin Gym, built four years ago on the family’s home estate. 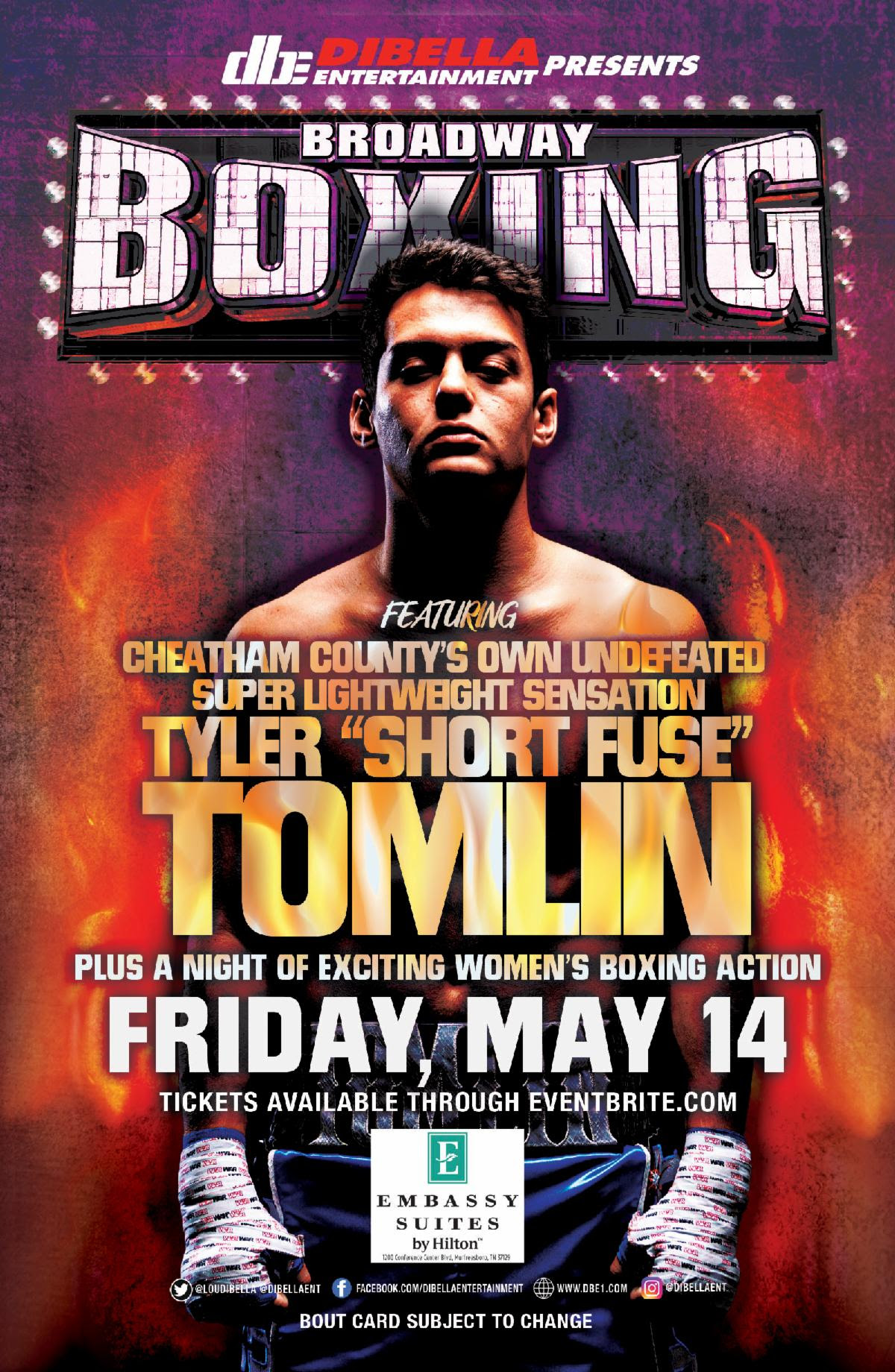 “I’m extremely happy that I’ve signed with an experienced promoter like Lou DiBella, who has been in the boxing business for many years,” said Tyler Tomlin. “I believe that we will do incredible things together as I ascend to the top of the boxing world. We’ve discussed building my career in my home state of Tennessee and that’s an attractive part of our agreement. I want to bring big fights to Tennessee and I’m looking forward to taking my career to the next level. I know DiBella Entertainment can make that happen.”

“After going back and forth with negotiations, Lou DiBella gave us many of the terms we were seeking,” said Darryl Tomlin, Tyler’s father and trainer/co-manager. “Ty has built a tremendous fan base here in his hometown of Cheatham County and Lou agrees that we should continue to fight in Tennessee and maintain the momentum. We want to have a great working relationship with DiBella Entertainment and it’s truly a blessing for Ty and our family to be with Lou, who has also been involved in some of my favorite boxing movies like ‘Southpaw’, ‘The Fighter’ and ‘Rocky Balboa’.”

The remainder of the May 14 event will be streamed live and exclusively on UFC FIGHT PASS®, the world’s leading streaming service for combat sports, at 8:30 p.m. ET / 5:30 p.m. PT, and will feature a world class, historic evening of exclusively women’s boxing. Broadway Boxing Presents: Ladies Fight is headlined by an eight-round lightweight contest between popular, former WBO featherweight world champion Heather “The Heat” Hardy (22-1, 4 KOs), of Brooklyn, NY, and Montreal, Canada’s Jessica “The Cobra” Camara (7-2).