The pair were embroiled in a heated build-up, but the Watford fighter had the final word, becoming Britain’s latest World Champion by securing a unanimous decision with scores of 97-94 98-92, and 98-92.

“Amazing. I don’t want to cry. Amazing,” said Courtenay. “I feel like my jab won me the fight, to be honest. My conditioning, my attrition, all of the hard work. My two coaches Charlie and H, kill me daily. They kill me in the gym. I hate them for it, but it bloody paid off. My nice job, my fitness, and my conditioning won me that fight.

“I have to give credit to her because that was a bloody good fight. She was tougher than I thought she’d be. I knew if I stuck to my boxing, I’d win. I had to keep listening to Charlie – he kept saying, ‘box, box, box.’ When I was getting into a war, it was stupid of me. The jab won me the fight.

“There was respect before I got in the ring because anybody that gets in the ring deserves respect. I now have more respect for her. When it was a shootout, that was my own stupidity. I’ve come a long way. I’ve said it all week. Tonight is proof that anyone can turn their life around.

“I’m a different person to who I was back then. I’m a World Champion baby! And I’m wearing this belt everywhere!

This is such a proud moment for me. This is such a good example to young girls that you can turn your life around. I can’t put it into words.” 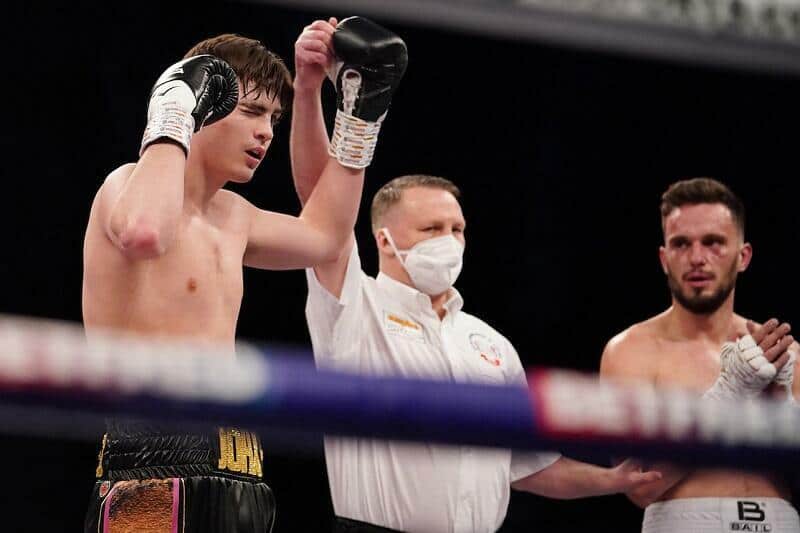 Earlier, John Hedges moved to 2-0 with a shutout points win over Croatia’s Stanko Jermelic in the night’s opening bout.

In his first fight at Light-Heavyweight, the 18-year-old from Takeley put a difficult professional debut behind him with a calm and collected performance.

“I’m so happy,” said Hedges. “I needed that after the start I had. I’m with a new team now, and it just shows what we’ve been working on in the gym. I want to thank my team for helping me to get that win. I feel really good.

“After that debut, I didn’t feel like I deserved to be on TV this time. This is what I needed to move forward. People must look at me and think I’m a bit of a fleshy Light-Heavyweight. That’s just the body type I have. I feel so much better at this weight. I feel strong, and I’m only going to get better as the journey continues.

“That still wasn’t my best, but it was an improvement from last time. I’ll be ready to go again next time with an even better performance. Nobody is going to remember these first few fights. I’m hoping to be like Conor Benn and headlining my own shows in the future.”