American heavyweight Christopher Lovejoy has signed to fight on May 15th in the first agreement since he pulled out of two previous bouts.

Lovejoy, who is 19-0 with 19 KO’s against all-Mexican opposition and nobody in the top 200, had previously agreed to face Dave Allen and Bermane Stiverne.

Citing promoter troubles, ‘One Shot’ pulled out of both and then retired from the sport, declaring himself the Greatest OF All Time (GOAT).

He claimed this was the case as he was the only undefeated heavyweight to retire would all knockouts, something of a hollow accolade.

But now, Lovejoy returns to put it all on the line against ex-WBA regular champion Mahmoud Charr.

The announcement was sent to WBN on Friday by promoter Errol Ceylan’s promotional company EC Boxing.

It reads: “On May 15th, 2021, the WBA heavyweight boxing world champion in Recess, Mahmoud “Diamond Boy” Charr, will finally get back into the ring.

“But it does not go against Trevor Bryan, as initially planned by the World Boxing Association (WBA).

“A repetition of the legal challenge initiated by Don King on January 29, 2021, is therefore excluded. 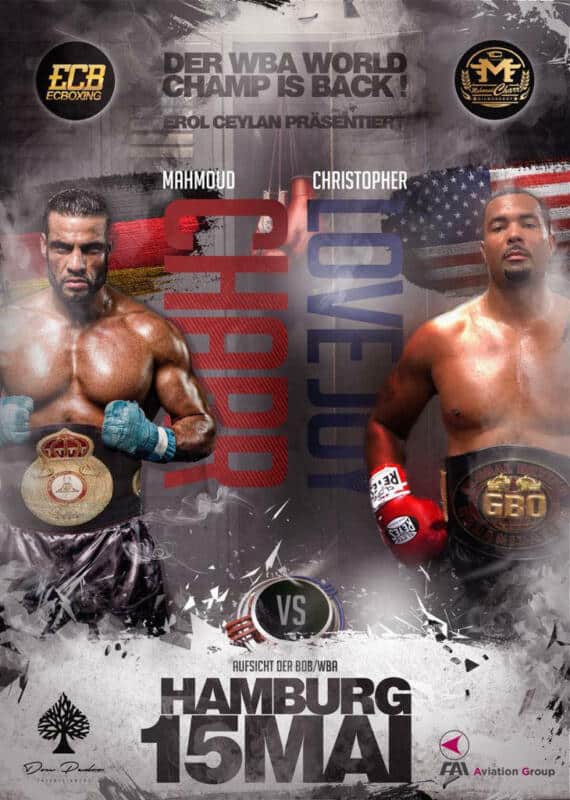 “To conclude with the often criticized absence from the ring, it is now against the previously undefeated American Christopher “Pretty Boy” Lovejoy.

“The Diamond Boy has anything but an easy opponent to face. Lovejoy has 19 knockouts. On Charr’s side, there are 35 fights, 31 wins, 17 of them by knockout.

Charr says: “It’s time to get back in the ring finally. I am in absolutely top shape! Lovejoy will suffer the first defeat of his career!”

He continued: “ And this is just the beginning! ”

“The fight will take place in Hamburg in the halls of the EC boxing promotion. It is only the beginning of the great comeback of a world champion who never lost his title in the ring.”

Theres’ only one question left to ask, “Will it go ahead, or will Christopher Lovejoy pull out again?”

We shall see in just over a month.