Eddie Hearn has again stirred the boxing pot by admitting he wants to control boxing by eliminating the competition like Oscar De La Hoya.

The Matchroom boss, who is joined with DAZN in an exclusive United States deal, is still vying for the number one spot in his own country with Frank Warren in the UK.

That fact hasn’t stopped Hearn from believing he’s already the biggest promoter on home soil and that he’s now moved to a global scale.

So what’s the Essex man’s endgame here? – Seemingly to have all the best fighters around the world signed to his company alone.

Speaking to the AK and Barak Show on Sirius XM for his Weekly Report, Hearn outlined his vision. He also gave Golden Boy rival De La Hoya both barrels into the bargain.

“It’s a good thing Oscar de la Hoya is using my name to build his profile,” pointed out Hearn.

“I respect Oscar. He’s doing his thing, and I’m doing mine. It’s nothing personal when I say I want to monopolize boxing. It’s just competition.

“I don’t look at Golden Boy as a competitor for what we’re doing on a global level.

“Where I want to take the sport, we will upset some people. We have been for years. This is nothing new.

“We want to be the biggest promoter in the sport and become a global player,” he added. 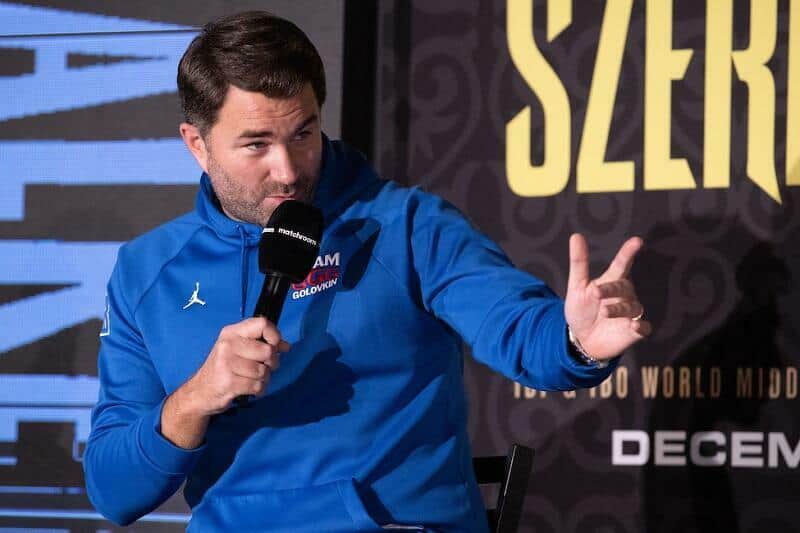 Bob Arum, Al Haymon, and plenty of others will have something to say about the Englishman coming over to the USA and trying to take over the sport.

They have been around for years and have amassed a solid stable of world champions.

Some would say there is room for everyone, but that doesn’t look to be in Hearn’s blueprint.

While on the show, Hearn also discussed two other events he has in the pipeline.

“Canelo vs. Saunders has sold 50k tickets so far. We will sell it out as just under 70k with standing areas not sold.

“Samuel Vargas is the perfect fight for Conor Benn. If Benn wins easily, he’s ready for the next step, but I don’t see that happening.”