Advertisements
Home » Carl Frampton on Jamel Herring clash: We both need to be better

Carl Frampton on Jamel Herring clash: We both need to be better

Carl Frampton aims to make history in Dubai by becoming a three-weight world champion at the back end of his illustrious career.

‘The Jackal’ faces American Marine Jamel Herring for the WBO super featherweight title, knowing victory secure his place in the Hall of Fame.

Discussing the test during fight week, Frampton was aware that the two fighters had indifferent wins coming into the contest.

The Belfast man wants the pair to give it their best coming to the first bell.

“It seems like we’ve been talking about this fight for well over a year now. I feel like it was beneficial for me to get out here early,” Frampton said on his training camp plans.

“I had a sparring partner with me. But I finished preparation here. I think it was beneficial to get used to my surroundings and the heat {more} than anything else.

“I finished off what has been a very, very good camp.”

“There’s no real issue, and I finished off sparring. I kind of put some ‘TLC’ on my hand for a week or eight days. I was back sparring, hitting the heavy bags.

“But the camp, apart from that, has been top-notch, outstanding, no complaints. I’m just where I need to be right now, and I’m looking forward to the fight.” 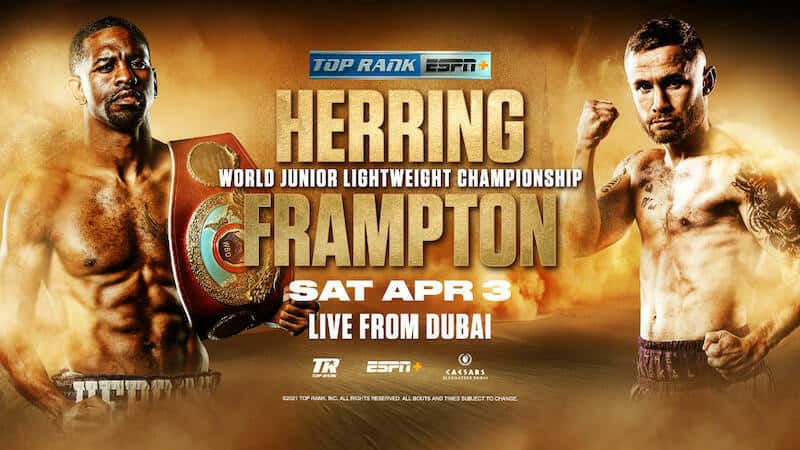 With a historic achievement within reach, Frampton knows just how vital the whole event will be.

“I’m very proud of what I’ve done in my career so far. But the chance to go down as the only ever three-weight world champion from the whole island of Ireland — one of the only British fighters to ever do it as well — you join an absolute elite bunch of global fighters to do that.

“I want to do that. I’m so determined to make that happen on the night, and personally, it will mean the world to me.

“I gotta expect the best Jamel Herring there’s ever been. We look at Jamel’s last performance (against Jonathan Oquendo). He gets a bit of criticism from that, from the media. And from other people.

“My own performance wasn’t brilliant in my last fight (last August against Darren Traynor).

“I think both of us need to be a lot better in this fight to come out victorious. I’m prepared to be better.

“Hopefully, Jamel is as well, and I think it’s going to be a good fight.”