Mike Tyson is set for a battle to break free from Triller after recently confirming his desire to move on from the newest boxing event organizer on the block.

‘The Baddest Man on the Planet’ released a short statement via social media, vowing never to compete on the platform again.

But WBN understands this may not be the case in legal terms. A contract reportedly still exists between Tyson and Triller for one more event.

World Boxing News has contacted Triller for more information. It’s a direct response to the following revelation by Tyson over the weekend.

“Just to be clear, there is no Tyson with Triller fight,” said Tyson. “I don’t know any Triller executives personally.

“I don’t have a deal with Triller or any head executive representing them for the next event.

“I’m a partner in Legends Only League, and my next event is with my league. 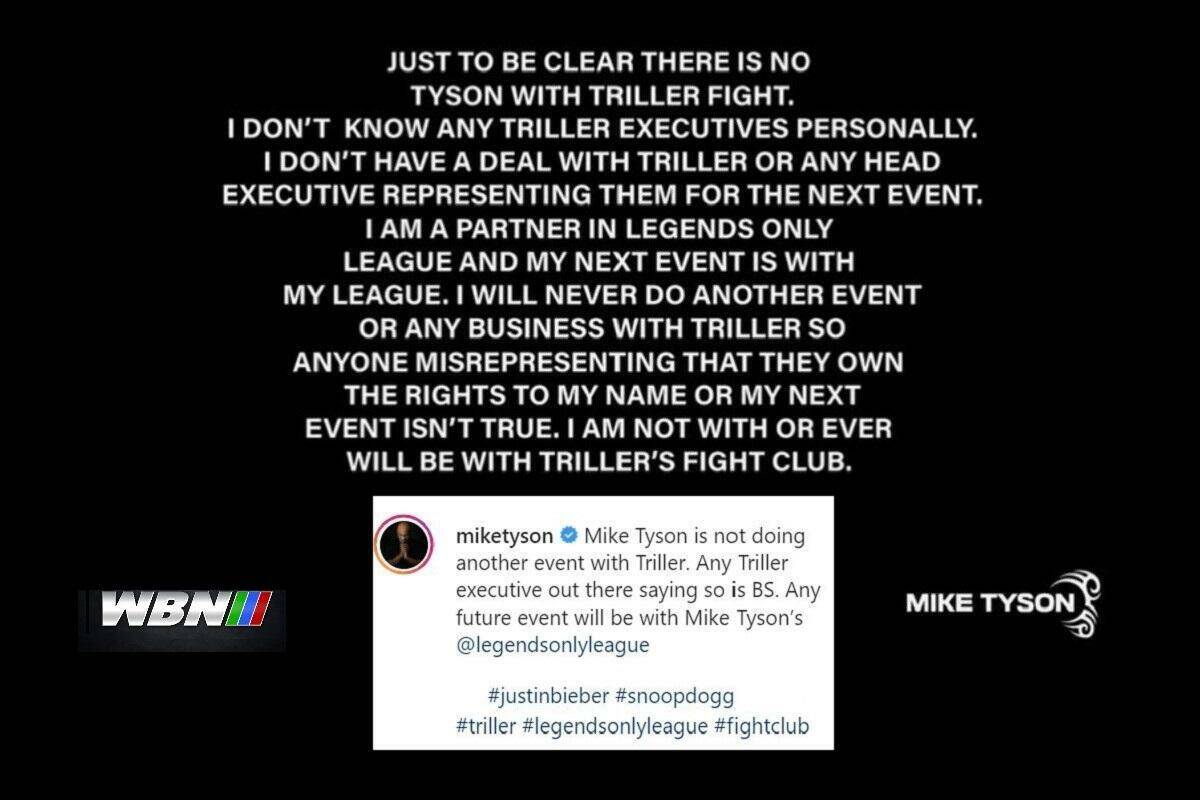 “I will never do another event or any business with thriller. So anyone misrepresenting that they own the rights to my name or my next event isn’t true.

“I am not with or ever will be with Triller’s Fight Club,” he added.

A third fight with Evander Holyfield is said to be in the offing, with Triller hoping to pair Teofimo Lopez with the 1990s super-fight rerun.

Triller purchased the rights to a mandatory Lopez clash against George Kambosos Jr. for the spring.

Triller boss Ryan Kavanaugh outlined his vision for upcoming shows in the wake of the purse bid victory.

He also captured a super lightweight bout between Regis Prograis and Ivan Redkach.

“Fight Club’s mission to bring something for everyone continues forward,” said Kavanaugh. “We are delivering fights that even the deepest purist will love and have expected on broadcast TV, such as Prograis v Redkach.

“Our goal is to continue to deliver a four-quadrant event that brings the under 30 audiences back into this world by crossing boxing, music, social media, and culture.

“We are proud of our team’s ability to pair top-notch rising stars with compelling and unique matchups and some of the greatest names in the sport.

“To combine them with music, fashion, and popular culture in an evening that will set new standards for success not just in boxing, but in sports and entertainment,” he added.

If Tyson wants to stage the trilogy with Holyfield on his Legends Only League platform, he could be in for a fight outside the ring with Triller.

Tyson and Holyfield have both expressed their interest in getting it on again. They last fought in 1997.