“I remember visiting you in the hospital in London, and all we did was laugh. I love you, bro. Till we meet again.”

He added: “I know Brendan (Ingle) would have been there to meet him when he got to the gates of heaven.

“Lee Noble fought this battle as he fought in the ring, with style and grit. The man never complained once.

“What a warrior! I’ll never forget you, champ! Till we meet again!”

World Boxing News has followed Lee’s story from the beginning. The turning point was a terminal diagnosis in February 2019.

The 33-year-old had already been battling for some time and had vowed to beat the disease.

“After seeing my doctor today, we’ve finally been told the news me and my family were dreading,” he revealed on social media.

“The cancer has returned in my brain and bone marrow. The cancer is (also) terminal.

“I won’t stop fighting till my final breath. Thanks for everyone’s support, especially my fiancée and family.”

“I just read your post, and I want to express my most sincere respect to you. Lee, you have a real boxer’s spirit by never giving up and fighting back,” said Sulaiman.

“Because of that, you are now honorary WBC World Champion, and we will be sending you a kit. Please send info by DM.”

Getting back in touch with Sulaiman, Lee was made an honorary WBC Champion and awarded a belt.

At the time, he posted to show his gratitude. 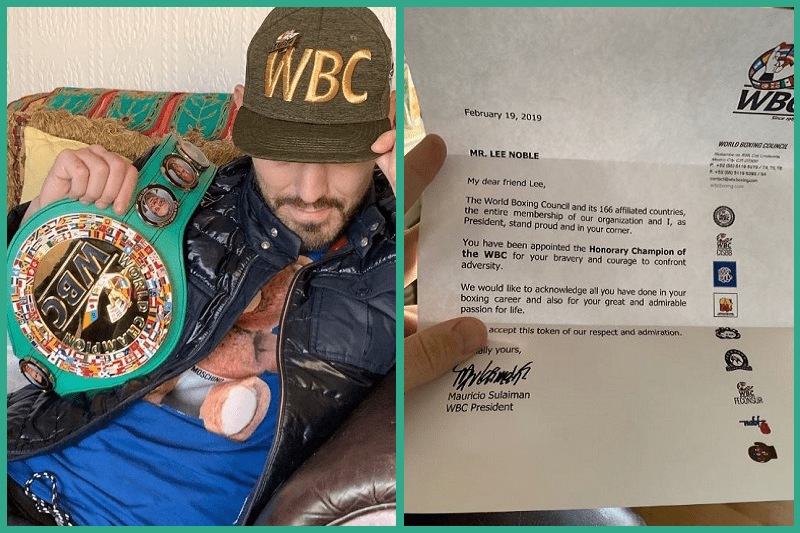 WBN reached out to Lee later that year, and he was gracious enough to give us an exclusive interview regarding his bleak outcome.

As always, he was a true gentleman and spoke with dignity.

“I’m having my good days and my bad days. In January, I had my stem cell treatment, which’s not fully complete just yet, but we’re on the verge,” he exclusively told WBN.

“I had a test recently for a bone marrow biopsy, and it came back all clear with my brain. I’ve just got to take my daily medication, quite a few tablets.

“I got diagnosed first in October 2014, two weeks after a fight I had. And initially, they just thought it was a shoulder injury or arthritis.

“But I had to keep going back to the hospital for testing, and they said I had leukemia.”

Revealing more on his struggle, Noble added: “We’ve been struggling financially, and it’s only been during the last couple of days a guy from Blackpool has offered to do a testimonial for me.

“The money that I get from that will help me set a gym up and start training kids.

“I need to be involved with boxing. That’s hopefully going to work out so I can then do something similar to what Kieran Farrell did but help amateurs and keep the kids from the streets.

“Boxing has given a lot to me. It paid my bills, but suddenly, I got cancer, and it was all taken away from me.

“As soon as I get a gym running up, I can start making some money, but it’s not going to be cheap, and it’s disappointing because I hate being stuck in the house.

“I just want to be out and doing things in boxing,”

WBN would like to offer our condolences to the Noble family, who couldn’t have wished for more of a warrior than Lee.

He will forever be synonymous with the word ‘fighter.’ Lee, you were a champion until the end.