Legendary boxing commentator Michael Buffer urged UK fans to book tickets for Canelo vs. Saunders this week only to be left disappointed at the response.

Buffer, who hopes to be present at the event in which Texas Governor Greg Abbott will allow 60,000 plus fans to attend against Covid guidelines, is excited to participate.

The sport’s voice is even on board, with between 70,000 and 100,000 crammed into the AT & T Stadium. This scenario could happen despite the pandemic still being in a precarious position.

He uttered his immortal words when revealing his joy at the confirmation of the venue.

A short time late, Buffer made his gaffe by telling UK punters they should sort out their travel despite the British Government banning international holidays for Brits until May 17th.

“I think American Airlines has nonstop flights-London to Dallas!” – he said. “Billy Joe Saunders fans can be there in a heartbeat! 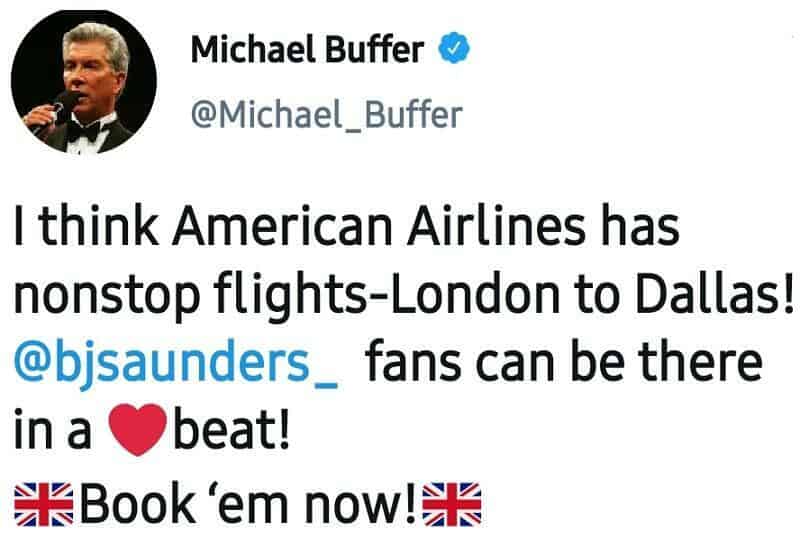 Responses informed Buffer of his wrong information, but the advice was still present hours later.

Despite substantial question marks over the event taking place as the coronavirus vaccination program is on the verge of opening things up by the summer, Dallas Cowboys Owner, President, and General Manager Jerry Jones are delighted to stage Canelo vs. Saunders.

“We are proud to host a boxing match of this magnitude as we welcome back Canelo Alvarez to AT&T Stadium to take on Billy Joe Saunders,” he said.

“AT&T Stadium was built to house the greatest sporting events on the planet. we feel we have another incredible boxing event on the horizon with this matchup taking place in Arlington on May 8th.”

Having 60,000 people in the same arena and attempting to follow social distancing will be some task for organizers.

Detractors have labeled the whole show a certain “super spreader” that will squarely fall on Greg Abbott if cases spike after that.

“We look forward to delivering a world-class event from this world-class venue to DAZN subscribers across the globe.”

Michael Buffer will give his sultry tones to the main event.