Former heavyweight contender and Tyson Fury rival Steve Cunningham is taking it upon himself to push a dangerous and unproven anti-vaccine message.

Cunningham, a former cruiserweight world champion who famously dropped Fury at Madison Square Garden, labels people ‘sheep’ if they want to get the lifesaving jab.

The American tweeted ‘trust the science’ regarding Utah mom Kassidi Kurill’s death in one tweet. The 39-year-old had died four days after receiving her second dose as a member of the medical profession.

The truth is, Kurill had a bad reaction to the vaccine that is indicative of any form of mass vaccination of this scale. A tiny amount of people will suffer an adverse and potentially life-threatening response due to underlying conditions.

Medical examiners released a statement saying Kurill’s death has no link to the vaccine. Cunningham was shown this evidence in response but still stuck to his guns.

The retired fighter is unmoved. Steve fails to realize that his actions will do more damage than good. More people would die than be saved if they listened to his advice.

Cunningham fails to realize that his controversial views should remain private if they in any way endanger other people. They almost certainly do. 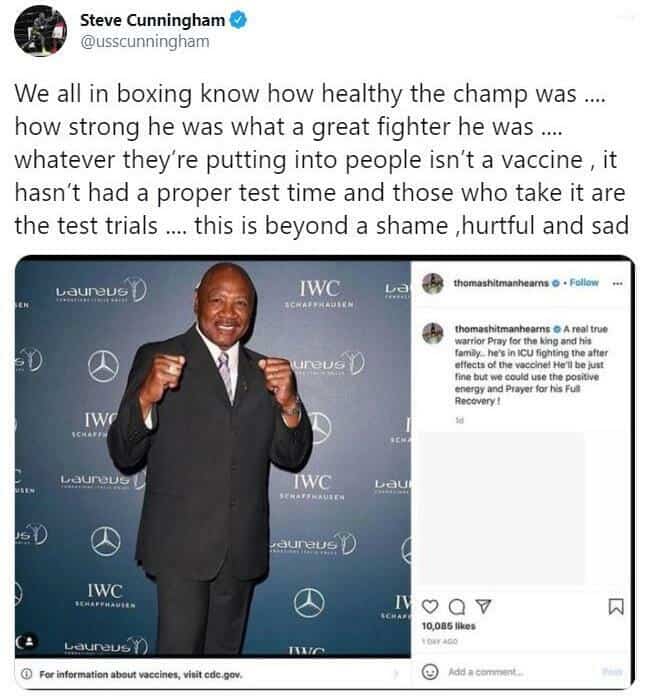 Posting his minority conspiracy and using the cases of Marvin Hagler and Kurill to urge people to “think about what they are putting in their bodies” – is wrong.

The general public cannot and should not be labeled “sheep ” if they take a vaccine, especially as it has gone through testing and is marked safe.

Cases of severe side effects are from almost HALF A BILLION doses and are not even in the 0.0001% of those who get it. Statistics should be evidence enough that you get the jab.

The dangers of not taking the vaccine far outweigh any chance of dying because of it. Those conditions already inside your body that the vaccine could trigger will also be affected far more by the virus.

Therefore, you have a far bigger chance of getting coronavirus and dying or being placed in ICU with an underlying health condition.

There’s also the argument of personal choice and invasion of privacy rights. But that individual choice is, ‘do you want to save lives and kill the virus quicker or not?’

Is that a choice?

Please, listen to any government advice around the world. Take the vaccine. The normality of the world depends on it.

Studies show that COVID-19 vaccines are effective at keeping you from getting COVID-19.

Getting a COVID-19 vaccine will also help keep you from getting seriously ill. That’s even if you get COVID-19 in the future.

COVID-19 vaccination is an essential tool to help us get back to normal. Learn more about the benefits of getting vaccinated HERE.