Fighting out of Austin, the 39-year-old Vera has rejuvenated his career by winning his last two fights, both at New England Sports Center, his last this past November. Vera burst upon the boxing scene 16 years ago in the first season of The Contender, Reality Television series. He went on to defeat a trio of world champions – Andy Lee, Sergio Mora (twice) and Serhiy Dzinziruk – capturing five regional titles including the NABO middleweight crown.

Eleven years Vera’s junior is Ball (15-1-2, 11 KOs), the winner of his last six fights, the most recent last August at New England Sports Center. The 6’ 2” Ball, fighting out of Worcester, MA, will have a 3-inch height advantage in the ring.

Ball vs. Vera, the evening headliner of the day-night doubleheader (separate admissions), is co-promoted by Ball’s promoter, Classic Entertainment and Sports (CES).

“For me,” Vera said, “I feel like I have another chance, and opportunity, to prove I’m not done yet. I started boxing late at 19. I’m coming into my own with a new trainer and I have one more good run in me. I’ve had two first-round knockouts in my last two fight to put me in this position.”

“For Bryan,” Granite Chin’s Chris Traietti said,” this fight is realistically it. He has worked hard for a chance to show that he still has another run in him, and he is going to get that opportunity April 17th. He has had plenty of time to get ready. He is mentally in a good place, the stage is set for him and if he falls short, then we need to really sit down and talk about whether he should continue fighting. But I have a good feeling about this one, I genuinely do. I do believe he has anther run in him for 2021. If I didn’t, I wouldn’t have put this fight together. Kendrick is a solid prospect and he come from a great gym, but the reality is, for Byran to even sniff the kinds of fights he used to get, he needs beat Kendrick Ball. So, hopefully this fight goes the way we want and then we can sit down and have a much more pleasant conversation about who we go after next.” 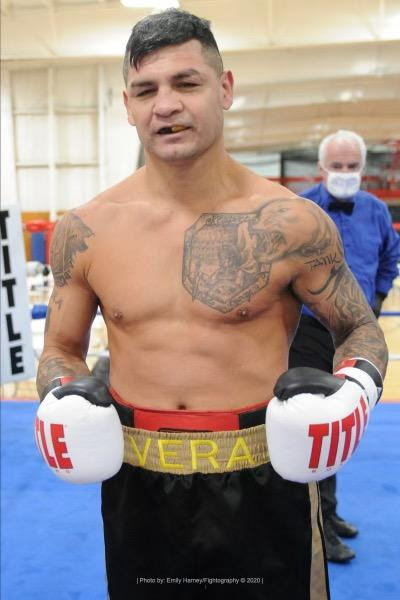 The most significant difference between Vera (28-16, 18 KOs) today compared to his earlier years is, of course, invaluable experience, but also much more.

“I was just tough guy,” Vera explained. “I’m still mentally tough, but I’m picking my shots much better now. I’m done if I don’t win this fight. I can’t afford another loss. I’m preparing for this fight like it was for a world title. I’m in top shape because I changed my lifestyle and don’t put on a lot of pounds between fights.”

Ball is a younger, hungrier fighter who would like nothing better than to add Vera’s name to his victim’s list, although he has never been in against anybody, qualify-wide, like Vera. Vera has fought 271 rounds as a pro, including seven fights (4-3) against world champions, compared to Ball’s 64, largely versus journeymen.

“I don’t know too much about him (Ball) other than he fought on the same card as me (Aug. 29, 2020),” Vera remarked. “I’m preparing for this fight like it was for a world title because I can’t afford to lose. He’s had softer fights than me and it looks like he wants to box and be fancy. I’ll have a perfect opportunity to break him down. I’m 100-percent serious about this fight. I feel like I’m the stronger fighter. I’m going to get inside and make him work. He’s never fought anybody as strong as me. I think I can overwhelm with my strength and experience.”

Vera believes that an impressive victory over Ball will reposition him for a lucrative fight, possibly against a former world champion he has lost a pair of decisions to in 2013 and 2014.

“I think I can be back in line for a real good fight,” Vera concluded. “I think another fight against Julio Cesar, Jr. I think it makes sense for both of us and a chance to make some real money.”

For Bryan “The Warrior” Vera, the “Crossroads” is more like his personal last call, naturally, pending the final outcome.