Claressa Shields overtook Amanda Serrano to be crowned WBN Pound for Pound Women’s number one with a decisive victory on Friday night.

The women’s superstar furthered her claim as boxing’s “GWOAT” Friday night and became the unified WBC, WBO, IBF & WBA Super Junior Middleweight World Champion by scoring a one-sided 10-round unanimous decision over Marie-Eve Dicaire of St-Eustache, Quebec, Canada, in the 10-round main event of the historic all women’s “SUPERWOMEN: SHIELDS VS. DICAIRE event at the Dort Financial Center and live on pay-per-view in Shields’ hometown of Flint, Michigan.

Shields (11-0, 2 KOs) also became the first boxer in the four-belt era to become an undisputed world champion in two weight divisions by her shutout victory (100-90 by all three judges) over now-former champion Dicaire (17-1).

Uncharacteristically, the 25-year-old Shields turned counterpuncher early in this fight to offset Dicaire’s attempts to bounce in and out of range. Relying on her reflexes to punish any attempt at aggression by Dicaire, Shields shut the Canadian down and then turned back to her customary forward aggression later in the bout.

Dicaire landed a quality southpaw left on Shields in round four, possibly her only significant blow of the fight, and Shields shook it off to no effect.

I can’t be mad about my performance,” said Shields after the bout. “She just kept elbowing and headbutting me.

“I tried for the knockout, and I almost had it a couple of times, but we’ve got two minutes and the ref not breaking it up when she’s holding me and elbowing me. 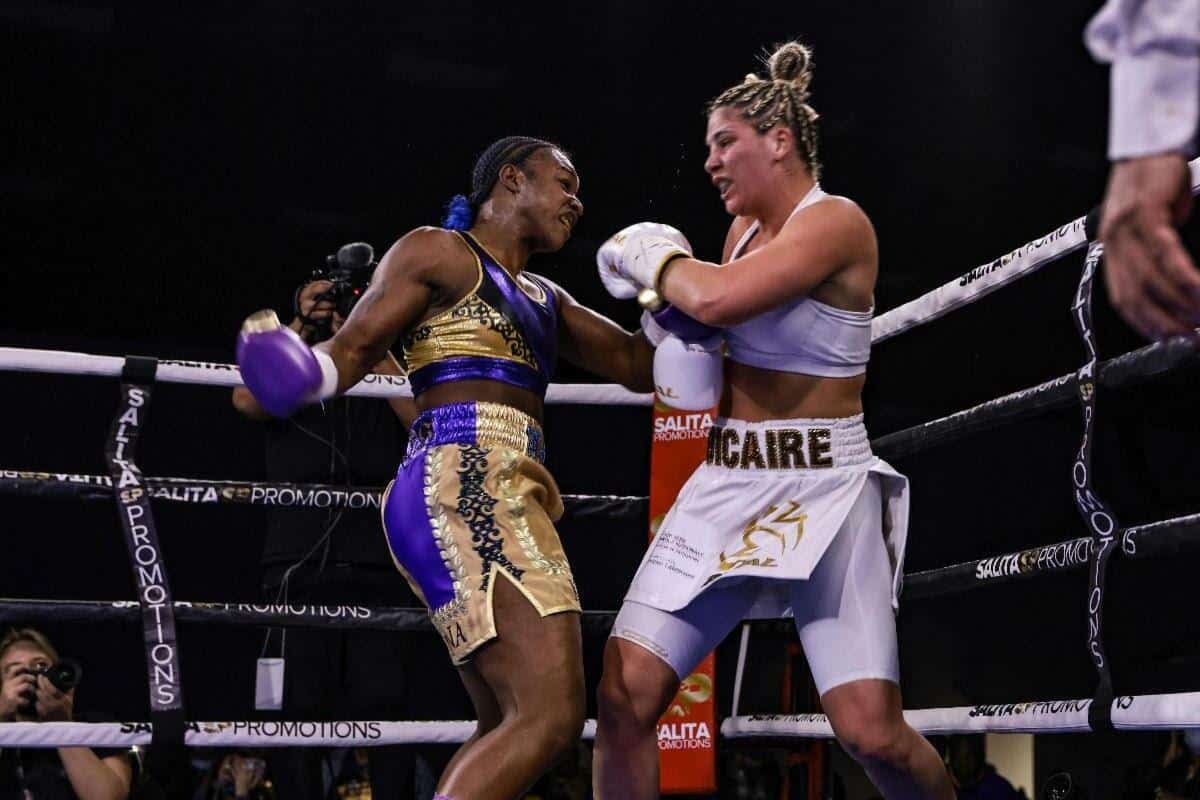 Shields said she was happy to have accomplished her latest piece of history in front of her family and friends in Flint, even if the pandemic meant a lot fewer fans in attendance.

“I’m happy to have been able to do it here (in Flint). I started boxing here at Berston Fieldhouse at 11 years old.

“Never in a million years did I think I’d be on pay-per-view and fighting for an undisputed title and be one of the biggest stars in boxing.

“I just wanted to win an Olympic Gold medal. God has given me two Olympic medals. I have 12 championship belts now. It doesn’t feel real to say undisputed twice.”

Dicaire continued her graciousness in post-fight questioning and promised not to let the loss dampen her future.

“I think Claressa Shields did a good job tonight,” said Dicaire. “Tonight, she was the best. Sometimes you win, and sometimes you learn. Tonight, I learned. I think this is just going to allow me to grow stronger.

“But I don’t box to protect my record or keep my record at 0 losses. I box to beat champions. Tonight, I had the chance to fight the real champion.

“She won this time but count on me to go back to the gym and work hard and be world champion again for sure.

Shields, who says her much-publicized MMA debut will likely be in Las Vegas in June, threw 409 punches in the fight and landed 128, including 34.9% of her power punches. Dicaire threw 263 punches in return but landed just 31.

“Flint Michigan got the baddest boxer in the world!” said Shields to her fans. “We two-time undisputed. Pacquiao who? Canelo who? When someone else does what I did, let me know.”