Floyd Mayweather intends to see his grandson carry the family tradition of sporting their wealth at every opportunity judging by a new snap.

Daughter Yaya, 20, shared a picture of her son with rapper NBA Youngboy wearing a Rolex worth thousands of dollars.

Mayweather bought the new bling for his grandson, who is not even two months old yet.

Flying private jets already, Kentrell Jr. is already getting accustomed to where he will be for the rest of his life – in The Money Team.

Since 2013, his grandpa earned almost one billion dollars in the ring and has since invested in a strip club, and more recently, a skating business.

Add those to the fact Mayweather plans to fight again in several exhibitions worth tens of millions of dollars, and the family is more than secure for the future.

Linked to facing YouTubers and UFC stars, ‘Money’ plans to take advantage of every opportunity to secure Pay Per Views from his vast social media following. 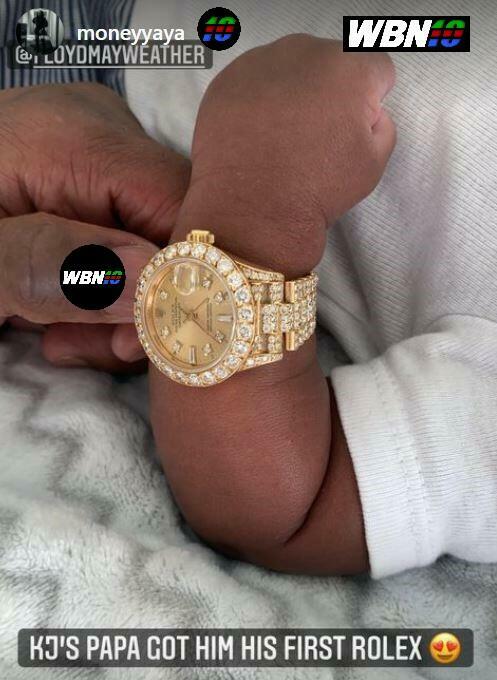 He last fought in 2018 against kickboxer Tenshin Nasukawa but has been attempting to put something together since 2020.

Due to the pandemic, Mayweather has had to postpone his plans. There are certainly more in the works for 2021.

Sadly, the one fight that could reignite his career away from exhibitions continues to be off the table. That’s a rematch of the most lucrative fight ever staged.

Manny Pacquiao has said on many occasions he’s willing to re-run the 2015 fight. Mayweather has not been so receptive.

Potentially, the only way a second encounter gets made is when Pacquiao himself moves into exhibitions.

The Filipino Senator saw a similar PPV with Conor McGregor fall apart when the Irishman was stopped by Dustin Poirier this year.

None-the-less, Mayweather is loving his new role as a grandfather and take care of his own – as per usual.

Kentrell’s father, YoungBoy, is also no slouch in net worth terms, though. The rap star is said to have a fortune of $6 million as of 2021.