Boston featherweight Troy Anderson, Jr. hasn’t made his pro debut yet, but he did get the opportunity to recently spar with undisputed world lightweight champion Katie Taylor (17-0, 6 KOs), the 2012 Olympic gold medalist from Ireland, who was a 5-time AIBA world champion as an amateur.

The 28-year-old Anderson, who is managed by Ryan Roach’s Fighter Locker, was supposed to make his pro debut earlier this year in Mexico. He showed up but his opponent tested positive for COVID-19 and their fight was canceled.

Taylor frequently travels from Ireland to Connecticut, where she prepares for fights with her trainer, Ross Enamait.

Anderson, a union Sheetmetal worker in local 17, was a decorated amateur who won a gold medal at the 2016 Rocky Marciano Tournament, as well as The New England’s Tournament twice in 2018-2019, and won Central Division of the New England Golden Gloves Tournament twice and runner-up twice during his four-year (2016-2019) run. He also competed in three national tournaments. 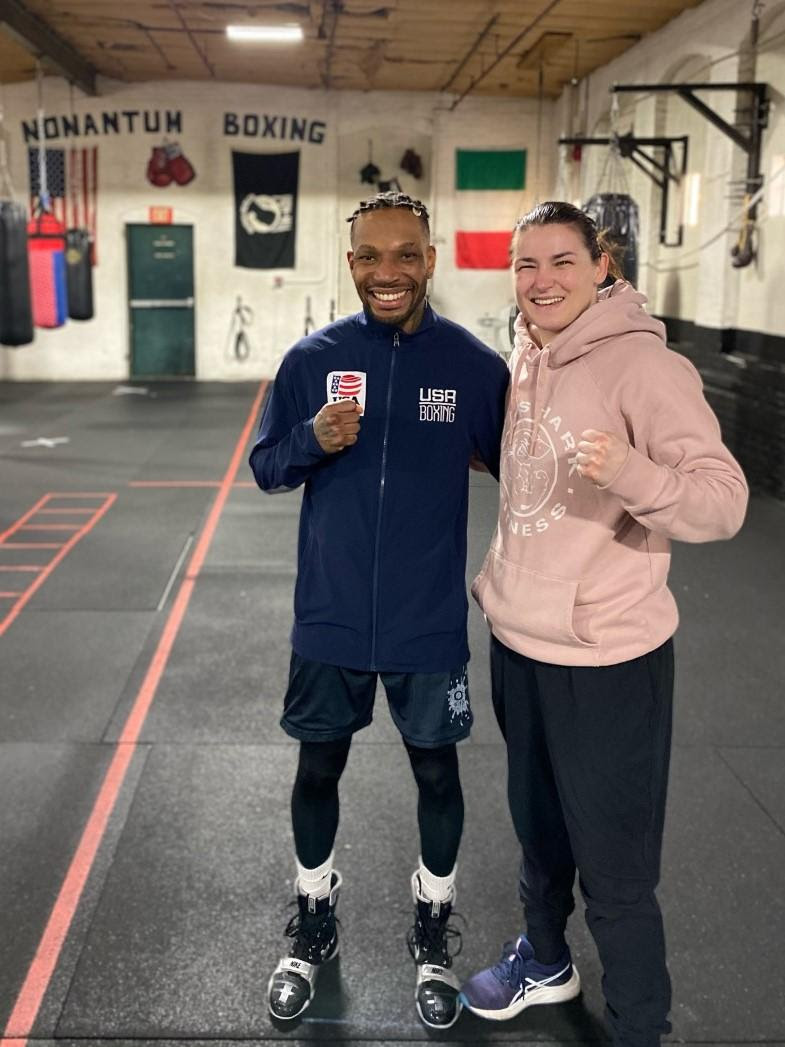 Anderson benefitted from being a southpaw when his trainer, Marc Gargaro, was contacted by Enamait about needing a lefthanded sparring partner for Taylor. “I’ve only sparred with her once,” Anderson said, “but I believe I will be getting more work with Katie at her training camp in the near future. I’ve already been asked back for more sparring.

“In the ring, Katie is patient, sharp, and quick with her combinations. She also doesn’t waste any movements all all. She is very tough and aggressive. Outside the ring, she is very nice, always smiling when talking, and a generous, decent human being.”

There’s nothing better for a young boxer than to train and spar with a world-class athlete, even if it’s a female against a male, the experience in invaluable.

I believe getting experience with a world champion helped me build up my confidence. It definitely opened my mind and eyes to trying new things like different movements and combinations, as well as make sure my defense and foot work was on point. Learning to become better at changing the tempo of combinations I was throwing. Also, realizing the things Katie did during and after sparring, understanding her mentality, and letting me know and see what it takes to be the best in the world, will help me grow big-time as a boxer.

“It is a little different sparring a woman but, honestly, it helped me work on my craft in areas I’ve been trying to improve on. I am still available to give and get good, solid work and effort. It’s expanding my mind, I was still able to pick and choose when to dig hard shots to make sure I was still solidly sparring for her, unlike with guys’ majority of punches are thrown hard.

Ortiz’ manager Ryan Roach commented: “This is a great opportunity for Troy. Anytime you share the ring with a world champion, even sparring, is a great way to elevate your level of confidence. As many know there are a lot of levels to this sport and these opportunities are crucial in building a fighter. I am really proud of Troy. His debut got pushed back, but he’s stayed in the gym and remains positive waiting for his shot. He has a great coach and team at Nonantum Boxing.”

Sparring Taylor may not have erased the disappointment of Anderson’s pro debut being canceled; however, the experience will surely make him a better fighter.

“Sparring a world champion was unbelievable,” Anderson concluded. “Just having the opportunity to step foot in the ring with world champion Katie Taylor was amazing. Literally, leading up to the day of sparring, that’s all I could focus on and think about. I was extremely locked in, because I wanted to give Katie Taylor good work and show her that reaching out to my coach Marc was not a mistake, and his words about me were solid. Seeing how Katie is when moving, throwing combinations, and on defense picking and choosing when to be aggressive and not, is unexplained. It was truly a blessing and I will forever be grateful and thankful for the experience and opportunity to be able to spar with a world champion, Katie Taylor”