As Diaz Jr. lost the belt on the scales on Friday, the championship will remain vacant.

The fight headlined a stacked card of action that was streamed live exclusively on DAZN in more than 200 countries and territories, including the U.S., Mexico, Russia, Tajikistan, Brazil, and Argentina.

“I’m a little upset. I felt I had done enough to win the fight,” said Joseph Diaz Jr. “It was a close fight. It wasn’t my best performance.

“It was a mistake on my behalf. No excuses, but I’ll be back. 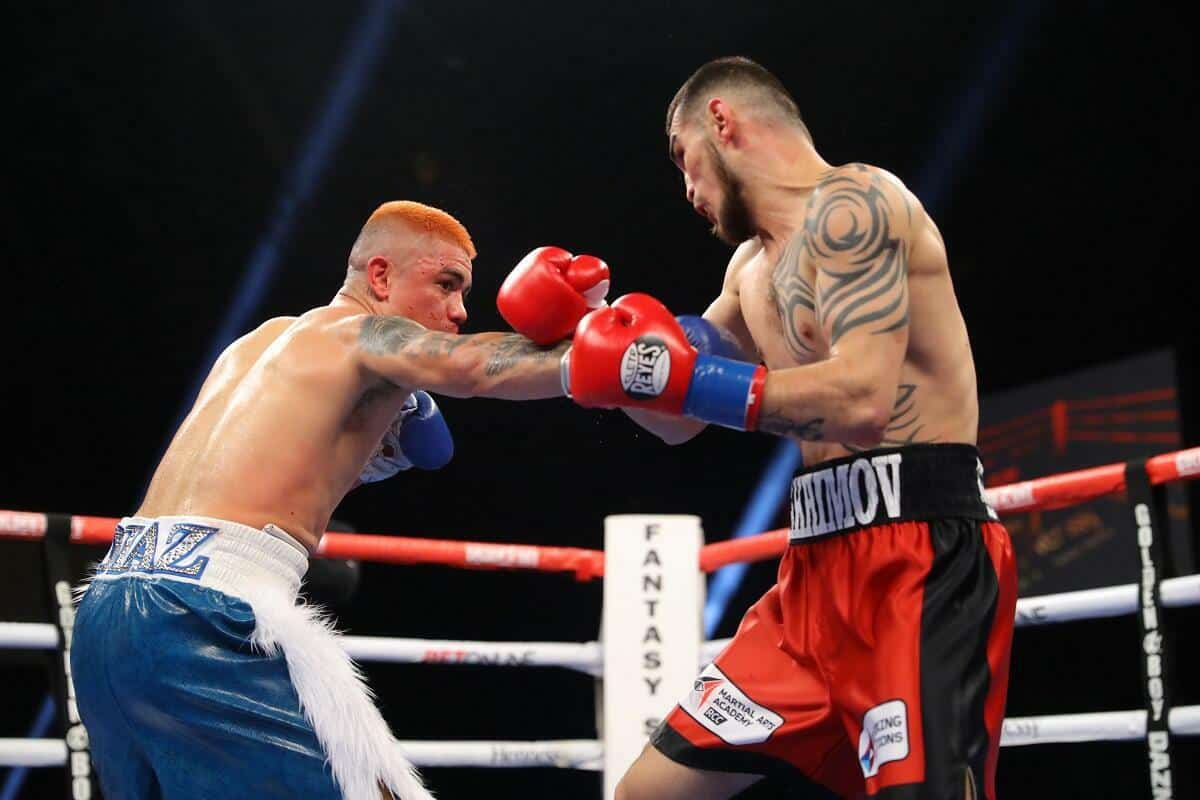 “Rakhimov threw a lot of combinations. But a lot of them landed on the gloves. I felt I threw more shots and landed more body punches. But I should have won the fight.”

“I did everything I was supposed to do,” said Shavkat Rakhimov. “Victory was on my side. I feel I won the fight. There were a few mistakes, and we need to work on them.

“I did everything possible. There were a few mistakes, but I will work on them. There is no perfect boxer, and I hope to gain more American fans.”

“I am very happy. We did a great job with my team,” said Brian Castaño. “It was a good fight. We all mistakes, and I have to fix things here and there, but a fight is a fight.

“Each fight is different, and I understand that. I knew Teixeira very well going into this fight. He is very strong, and he has a lot of heart. He is great. This was one of the greatest victories of my career.”

“I should have sat down more on my punches,” said Ronny Rios. “I went in a little bit too much with my head, and I waited too long. But I’m happy with the win. I really want a world title shot for my next fight, and I think this fight was a necessary step in that direction.”

Shane Mosley Jr. (17-3, 10 KOs) of Pomona, Calif. defeated Cristian Olivas (19-8, 16 KOs) of Mexicali, Mexico, via stoppage at the end of the fifth round of a scheduled 10-round super middleweight clash.

“I had a really tough opponent in there,” said Shane Mosley Jr., “But I went in there, looked sharp, and got the job done. These are the kinds of fights that I need to show people that I am ready for a world title.”

Armenian contender Azat “Craz A” Hovhannisyan (19-3, 16 KOs) scored an eighth-round technical knockout victory against Enrique Bernache (24-12, 12 KOs) of Guadalajara, Mexico, in a scheduled 10-round featherweight clash. “Crazy A” ended matters at 35 seconds of the eighth round.

“I’m very happy,” said Azat Hovhannisyan. “It’s my first time with Robert Garcia. We had a lot of good sparring. I’m No. 1 in the WBA. I want to fight a world champion.”

“After 16 months away from the ring, it feels great to be back,” said Victor Morales Jr. “I knew he was going to be very tough. He is a former world champion, so I knew it was going to be a difficult bout. Either way, I was able to fight either on the outside or on the inside.”

Dalis Kaleiopu (1-0, 1 KO) of Waianae, Hawaii, made a successful pro debut by defeating Eduardo Sanchez (2-3) of Corcoran, Calif. via third-round knockout in a super lightweight battle. After a spectacular start, Kaleiopu stopped Sanchez at 38 of the aforementioned round.

“It’s been a long time because of COVID,” said Dalis Kaleiopu. “So, it felt great to make my pro debut finally. I hurt him many times, but I let him go. But then I landed a shot he couldn’t come back from, so it feels good to stop somebody that has never been stopped.”