Just 18 days remain until Floyd Mayweather was due to return to action in a specially arranged exhibition set for broadcast on Fanmio.

Despite minimal fanfare on the contest against an internet vlogger, Mayweather is on the verge of confirming a bout’s delay.

Fanmio, a celebrity greeting site that partnered with Mayweather on the venture, is yet to remove the clash from their website.

The situation is causing some confusion.

Questions have already on the table as to whether the contest will ever go ahead at all. But we await confirmation on any rescheduling for now.

Mayweather, who turns 44 this month, will be giving up fifty pounds in weight against the lanky YouTuber – if the bout ever makes it to the first bell.

Pay Per View prices began at $24.99 for early birds, rising to $34.99 if they hit one million purchases. But as it was never spotted if the jump to £34.99 took place due to an automatic price hike to £59.99 on December 29th, nobody knows how sales have accumulated. 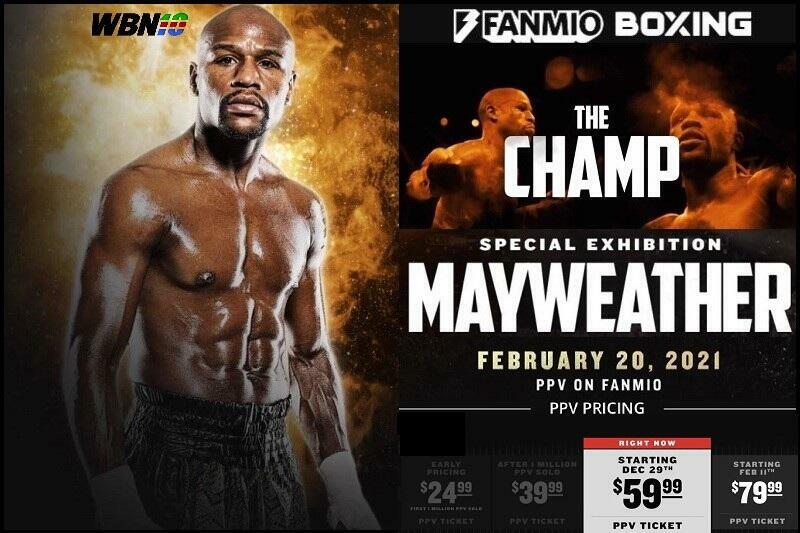 Demand for such events has seemingly waned since Mike Tyson and Roy Jones Jr. competed last year. The proof will be in the pudding when a YouTuber attempts to headline his show in the spring of 2021.

Without the crutch of a bonafide boxing name, vloggers’ future in boxing will hinge on sales for that PPV.

Regarding Mayweather, the former pound for pound king continues to take up column inches with several names in combat.

The most recent was an offer from Sean Gibbons to fight Manny Pacquiao in a rematch. Most of the boxing fraternity would prefer to see that than Mayweather vs. a YouTuber.

As exhibitions continue to gather pace in the sport, that will remain a possibility for many years to come.

Both Mayweather and Pacquiao could be in limbo for the next few months if their upcoming fights hit the skids.

Pacquiao was due to fight Conor McGregor until Dustin Poirier stopped the Irishman in his last UFC outing.

Paradigm Sports released a statement denying several rumors surrounding Pacquiao and may well look to resurrect the cross-codes battle once the dust settles on the Poirier stoppage.

We’ll find out more in the coming weeks.