The team of Manny Pacquiao has reacted to the news that the eight-weight champion would no longer have recognition as the WBA welterweight title-holder.

In no uncertain terms, MP8 Promotions head Sean Gibbons made his feelings plain on the matter.

Pacquiao was removed as ‘super’ ruler ahead of a proposed clash with Ryan Garcia in 2021. The title could have been on the line if the WBA had given the Filipino Senator more time.

Instead of training and thinking of his career, Pacquiao has helped his fellow countrymen deal with several natural disasters and a raging pandemic.

After taking 2020 out to do all he can, Pacquiao intended to fight twice in 2021. Despite this fact, the WBA moved to elevated Yordenis Ugas and gave the Cuban Pacquiao’s strap.

The ‘Pacman’ now faces an uncertain future. At the age of 42, he has no bargaining chip for a battle with either the 147-pound champions.

Unifications with Errol Spence and Terence Crawford were distinct possibilities until the WBA made their rash decision.

Gibbons showed his obvious disapproval for all to see in response to a Premier Boxing Champions post on the matter. 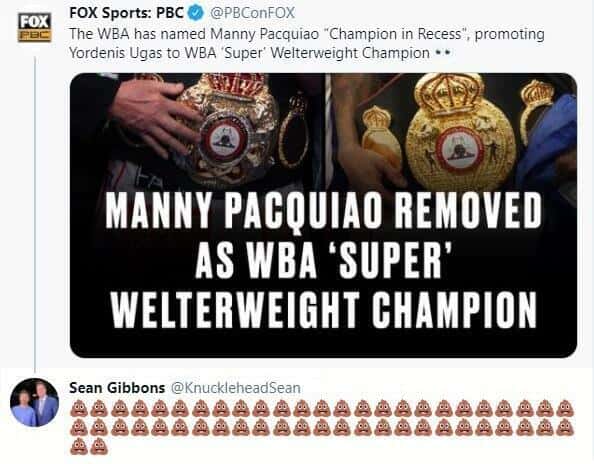 New champion Ugas has since pleaded with the fans not to hurt him for being handed the title without a fight.

“Manny Pacquiao is a legend, and he will always be champion. His intention was McGregor and now Ryan. But you cannot – behind your history, hijack a championship,” said Ugas.

“This gives fans a chance to see a great unification fight at 147lbs. I don’t want this position for easy battles.

“My team has my consent for my next fight to face Pacquiao. That’s if he wants to show who he is, the true WBA champion.

“Or I’ll fight another of the champions for an excellent unification fight.”

So what’s next for Manny Pacquiao?

Well, it seems to be Ryan Garcia for the immediate future. Who knows after that?

Pacquiao could well decide that enough is enough now that he has no real clout to land either Spence or Crawford.

The welterweight division was pushing towards a super-fight in 2021.

But with Spence and Crawford also no nearer an agreement, none of the biggest match-ups look likely to happen anytime soon.