Unified ruler Errol Spence Jr has turned his attention to Yordenis Ugas after the WBA stripped Manny Pacquiao of the welterweight championship.

Spence wasted no time reacting to the WBA removing Pacquiao as their champion to install Ugas as the new ‘super’ ruler.

‘The Truth’ says he’s all about that unification smoke and informed Ugas of his intentions.

“All you needed was something that I want,” said Spence, who holds the WBC and IBF versions of the 147-pound crown.

It wasn’t long before Ugas responded.

“I have it (the WBA title). We are going to do it for three online (sic) championships. Let’s give the fans a great fight. I’m ready,” he pointed out.

Premier Boxing Champions also put it to fans, with the fight now a distinct possibility for 2021.

“Do you want to see #SpenceUgas this year?” – the PBC stated on a potential FOX broadcast. 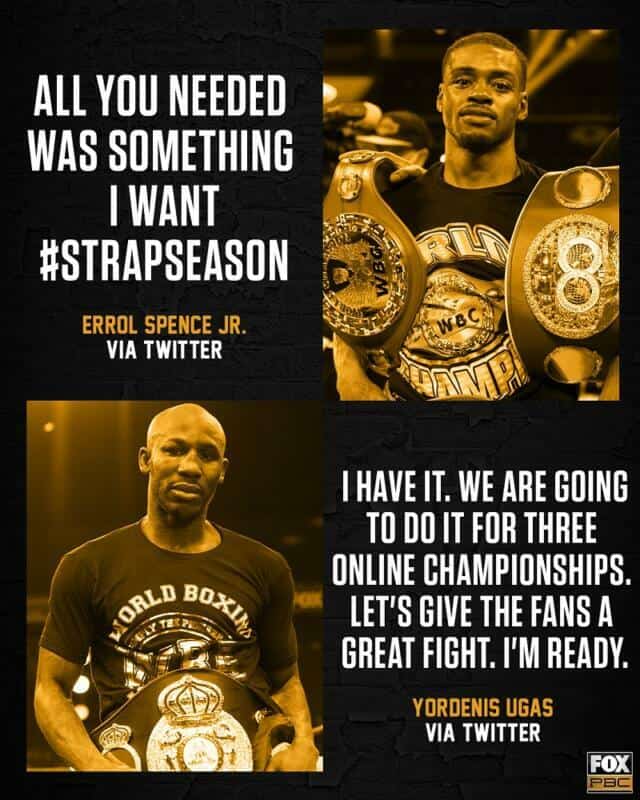 Ugas had announced his delight was tinged with a little upset as fans continue to criticize him for accepting Pacquiao’s belt without a fight.

In the Cuban’s defense, Ugas believed the Pacquiao fight was never going to happen.

“Pacquiao took Thurman’s belt off him (who I was due to fight). He had the opportunity from him.

“But he was not going to give me the opportunity, nor did he want a unification (with Spence).

“It’s the difference. For my next fight, I want unification (with Spence).

“It looks like I’ll have the fight that I’ve been chasing for years. Do not hate me. Congratulate me,” he added.

This stunning turn of events is terrible news for Terence Crawford also. A fiery exchange with Spence on social media came to nothing this week.

Firmly setting his sights on Ugas, Spence may well be able to put himself in a position where he holds three versions of the welterweight championship.

That scenario would be a massive bargaining chip in any future collision with Crawford.

Promoter Bob Arum had previously accused Spence of pricing himself out of a battle with ‘Bud.’

Should Spence then have three belts to Crawford’s one, the 30-year-old would hold substantial claims to taking a bigger slice of the purse.