Anthony Joshua will do all he can to make sure a fight with UK rival Tyson Fury remains for all the marbles in the heavyweight division.

Firstly, the ongoing row about whether mandatory challenger Oleksandr Usyk gets his shot at the WBO belt continues to hinder proceedings.

Joshua’s promoter Eddie Hearn reiterated the unified champion’s desire to have all the belts up for grabs and offered a solution.

“This fight is bigger than the belts; this fight is undisputed. AJ, I’ve said it a million times, he wants to be the undisputed champion,” Hearn told the Toe-To-Toe Podcast.

“And who is the best heavyweight on the planet? At some point, we have to take charge of this sport and say, ‘No more’ (mandatories getting the way of that).

“Firstly, I will do everything I can to keep the belts on the line for (Fury vs. Joshua) because, for me, that is the glory. 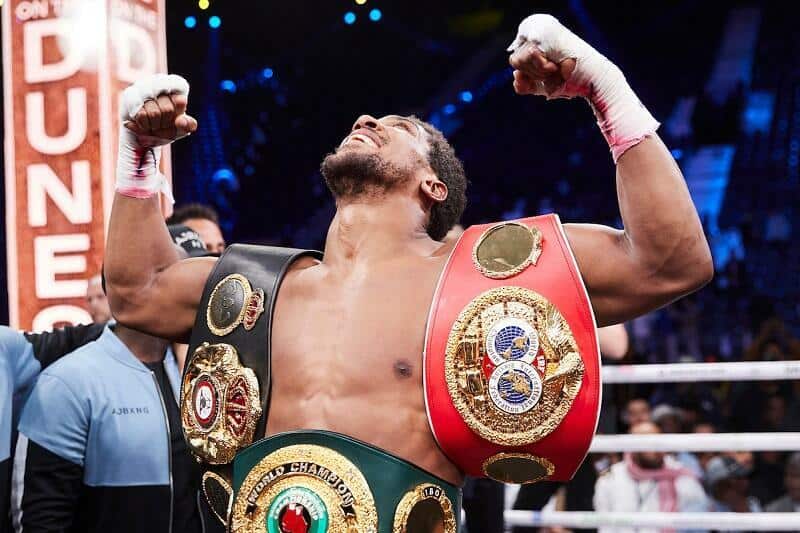 “Seeing AJ standing in the ring, covered with every bit of silverware, you can win in boxing. That’s always been the aim he had when he turned professional.

“You could say to Usyk, ‘Take the fight with Joe Joyce for the interim (WBO belt), and after that fight, it becomes the full championship.’

“One thing about Usyk is, he’s a classy guy, a boxing guy through and through. He will see, even in his position, he will see that Fury – AJ is so good for the sport of boxing.

“‘So Oleksandr Usyk, do you want to stop the undisputed world heavyweight championship fight.

“The fans won’t like it if he does it as well, and he’s a boxing man through and through.

“We can’t just disrespect him and say, ‘Sorry, mate, you just have to wait.’ We have to come up with something, and the answer I see is for him to fight Joe Joyce,” he added.

Usyk vs. Joyce is touted to take place on the Fury vs. Joshua undercard. Due to past experiences with UK Pay Per View, that’s unlikely to happen.

If any fight has the potential to be PPV on British soil, it’s usually made into a standalone event to maximize Box Office revenue.