It comes as several fellow boxers and fans express their worry over Cleverly’s alternate ego ‘Clev the G’ on social media.

‘Clev the G’ is a god-loving, pot-smoking, foul-mouthed naturist who isn’t shy about airing controversial views to the world.

In reality, before his retirement, Cleverly was an intelligent, mild-mannered, and polite man who earned a maths degree from Cardiff University.

WBN has followed Cleverly closely over the past few years as his activity online was taken to new levels.

Locked away in what seems to be a paradise with his stunning girlfriend, the Welshman is truly living his best life.

But it’s the persona he offers on social media that worries those who used to be close to him.

Editing WBN’s article written in December, and Cleverly has posted passages many times over the past few days. He gave a massive clue as to how he’s doing mentally.

In the final three posts of a series covered by WBN earlier,  Cleverly doctored a line that read: “Hopefully, Nathan Cleverly is just joking around, and his mental state is in as good a shape as his fitness.” 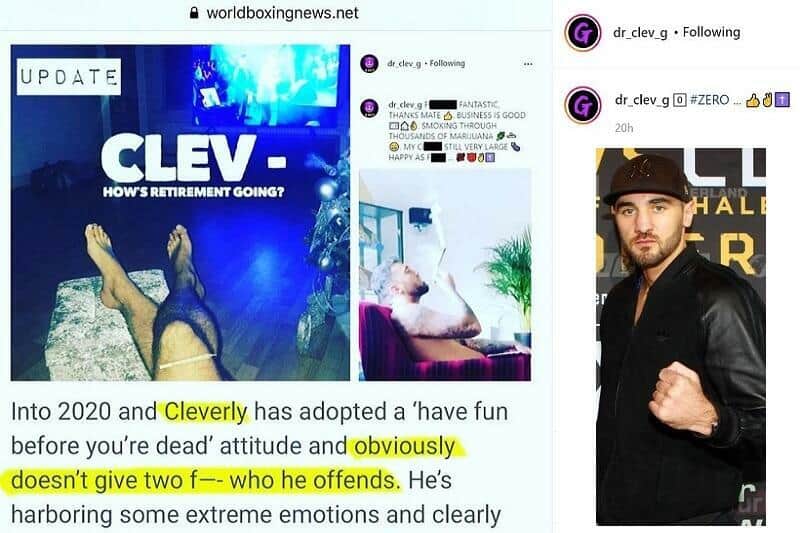 Clev’s edit stated: “Hopefully, his mental state is in as good a shape as his fitness,” in what looks to be the ex-fighter letting people know he’s of sound mind.

He doesn’t give a f— what people think.

This line, “‘The less you give a f**k, the more the world respects you’ has become Cleverly’s mantra. But where is Clev currently mentally? It would be good to know for those concerned.

“Boxing is now well and truly off the menu regarding Cleverly, who calls the sport ‘a mug’s game’ and says ‘the people in it are s—!’ – was also highlighted by Cleverly.

The part stating ‘The less you give a f—, the more the world respects you’ – was his chosen phrase.

That certainly seems to be Clev’s mantra these days.

He also put his yellow marker to the fact, “Boxing is now well and truly off the menu for Cleverly. He calls the sport ‘a mug’s game’ and says ‘the people in it are s—!’”

In a final passage, Cleverly wanted his followers to know, “religion became more dominant for Cleverly as his new girlfriend also made her first appearance.

“Cleverly was living his best life.”

Let’s hope he still is.