Top Rank’s latest massive fight night, their first of 2021, will clash with a special exhibition arranged by ex-fighter Floyd Mayweather.

Mayweather has already confirmed the date for his Fanmio attraction opposite a YouTuber. Top Rank will now go up against Mayweather in a rating war.

ESPN will televise what Top Rank calls ‘The race for the 2021 Fight of the Year’ as Miguel Berchelt and Oscar Valdez face off in one of the most anticipated all-Mexican fistic showdowns in years.

Promoted by Top Rank, in association with Zanfer Promotions, Berchelt-Valdez and Flores-Cancio will be televised live on ESPN and ESPN Deportes 10 p.m. ET/7 p.m. PT.

“Top Rank promoted all three bouts between Marco Antonio Barrera and Erik Morales, and I view Berchelt-Valdez as this generation’s Barrera-Morales.”

Berchelt (38-1, 34 KOs) had held the WBC super featherweight title since January 2017, when he knocked out Francisco Vargas in the 11th round.

His last five title defenses have ended via the quick route, including a ninth-round TKO over Miguel Roman. A sixth-round TKO over Vargas in their May 2019 rematch, and a fourth-round knockout over former world champion Jason Sosa.

He fought last June in a non-title bout and knocked out Eleazar Valenzuela in six one-sided rounds.

“This fight is the one that I dreamed of since we were both amateur fighters,” Berchelt said.

“Valdez is a great fighter, and it will be a great fight. I am preparing with everything to win by knockout. To leave no doubt that I am the best super featherweight in the world.”

He suffered a severely broken jaw against Quigg in March 2018, returned 11 months later, and has since won four consecutive bouts.

Since moving up to 130 pounds, Valdez has scored stoppage wins over Adam Lopez and Jayson Velez.

Valdez said, “Whenever there are two Mexicans in the ring, it is a guaranteed war. It will be an honor for me to bring a great war to my fans.” 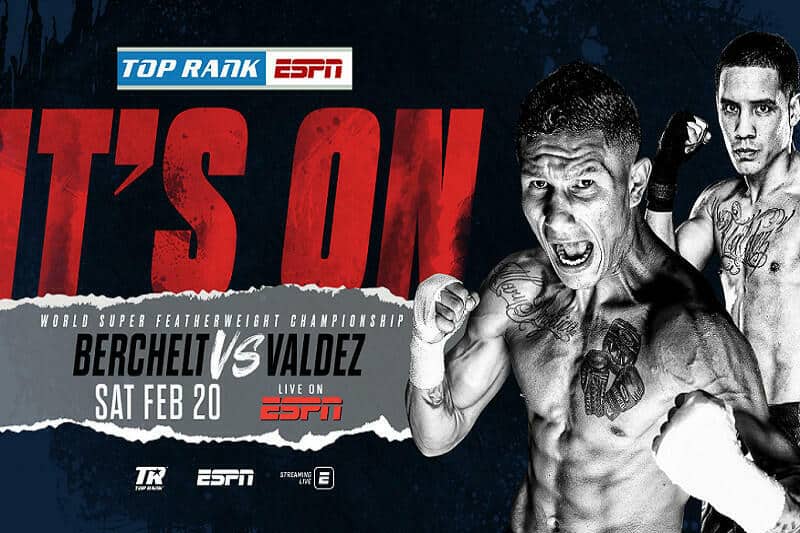 He started the year Feb. 22 on the Deontay Wilder-Tyson Fury II undercard and dominated Matt Conway over eight rounds.

Flores shined on a pair of occasions inside the MGM Grand Las Vegas Bubble, winning decisions over Josec Ruiz and Ryan Kielczweski.

Cancio knocked out Alberto Machado in February 2019 to win the title and repeated the deed with another knockout over Machado that June.

“My main goal is to win a world title,” Flores said. “Dominating a former world champion will put me in a great position to challenge for a title soon.”

“I know that this fight is the first on my path to becoming a two-time world champion.

“I would like to thank my fans, who have been so incredibly supportive. I’ve heard you loud and clear. I can’t wait to put on another great show for you.”

Floyd Mayweather left Top Rank after wanting out of his contract during the 1990s. He went on to become the highest-earning sports star in the world.

The relationship between Floyd Mayweather and Bob Arum went through a rocky patch. That seems to have petered out over the years.