World Boxing News could be presenting two trophies at the Floyd Mayweather Gym in 2021 after Gervonta Davis made an ominous move in the 2020 poll.

Davis knocked out Leo Santa Cruz in fine style earlier this year. The American has now claimed the most WBN Fighter of the Year 2020 votes over the past 48 hours.

From under ten percent a few days ago, ‘Tank’ has now overtaken Errol Spence Jr. to claim third place in the ballot.

Davis has now polled over 1500 of almost eight thousand votes in what is set to be a record-breaking year yet again.

Just nine days into the six-strong field being open for fans to cast their choice, the 2019 record of 19620 is certain to be beaten this year.

Voting ends on January 18th. It gives Davis plenty of time to claw back the deficit to current leader Teofimo Lopez.

The undisputed lightweight champion is over eight hundred ballots ahead of Davis. But he has gained far fewer over the past two or three days.

Lopez surged off the blocks alongside pound for pound king Canelo Alvarez. It looked as if a two-horse race was on the cards initially. 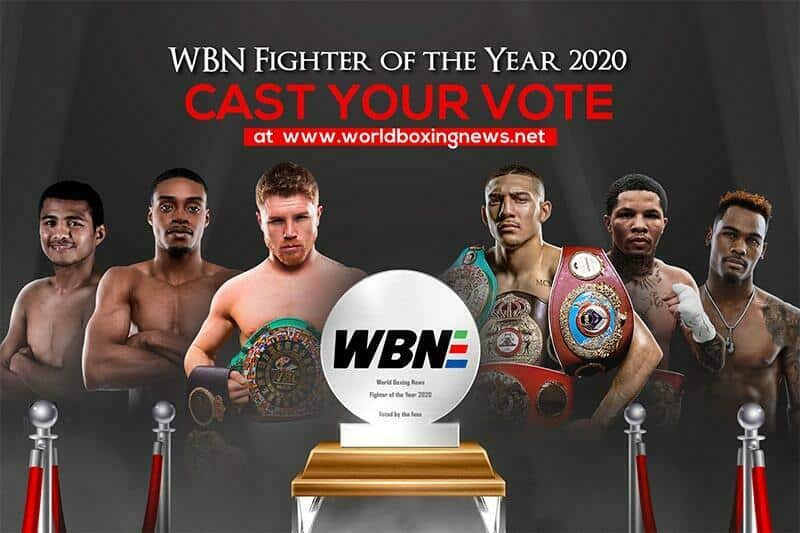 But soon enough, Spence and Davis made their respective moves, with the latter’s being the most visible since then.

All four would be worthy winners in 2020 as boxing scrambled back from the devastation of the pandemic.

Spence did brilliantly as he recovered fully from a terrifying car accident. He then defeated the dangerous Danny Garcia.

Finally, Davis scored a KO of the Year contender against one of the best boxers at the lower weights in recent years.

Plenty of twists and turns are expected over the next three weeks. The winner will eventually be crowned in mid-January.

If successful, Davis would be in line to receive his award alongside mentor Mayweather when WBN travels to Las Vegas for Cinco de Mayo weekend.

Furthermore, please make sure to cast your vote and have your say.